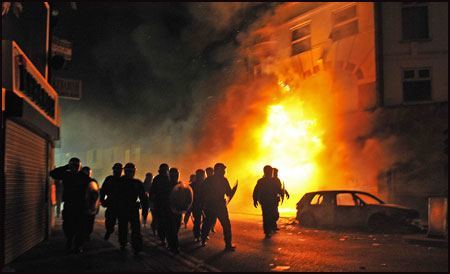 As London returns to work after a weekend of rioting by a small minority, some politicians blame the latest Tottenham riots on Government spending cuts and social division. While there is no doubt that the credit crisis and economic recession are hitting many families hard. The type of property stolen points in another direction. Urban and rural thieves show a marked preference for electrical goods or other expensive items rather than the necessities of life. Those who witnessed the rioting in London report sports shops being plundered. Digital games and hi-fi equipment were on thieves’ shopping lists. The shocking increase in urban and rural crime may have more in common than meets the eye. It seems to be motivated more by greed rather than need with the fact that the criminals expect that they are likely to get away with it. This is true in the city and its suburbs as it is anywhere else in Britain. Attempts to justify looting as a symptom of economic recession are mistaken and misleading. At such a critical juncture Ganesha tries to identify the reason that sparked the riots with the help of Vedic astrology. 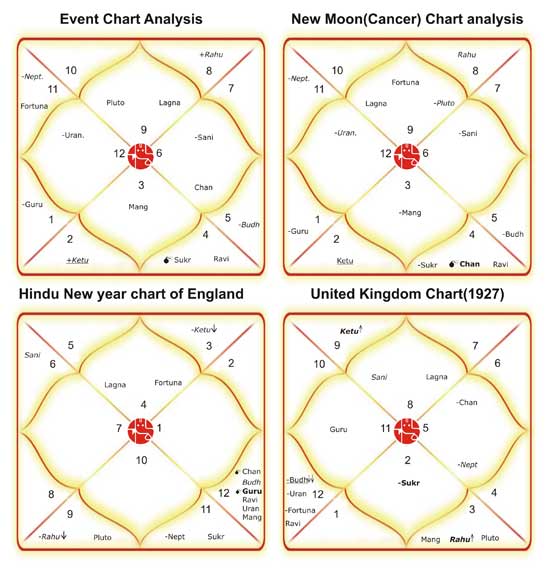 Event chart analysis
Mark Duggan was shot by police in an incident last Thursday in Ferry Lane, Tottenham, north London, that sparked the London riots. When the shooting took place in Tottenham, north London, the fiery sign Sagittarius was rising in the eastern horizon and Pluto was placed therein. Mars the symbol of violence, and conflict placed exactly over the 7th house Cusp. The Mars opposition Pluto triggered the event. Adding to this, Mars in 7th house and Saturn in the 10th house were aspecting each other, so the troubles spread like wildfire.

New Moon(Cancer) Chart analysis
The new moon at Cancer occurred in the 8th house (the house of loss and distress) in a watery sign (public emotions). Pluto, the planet of distraction, is placed in the rising, opposing Mars in the 7th house and forming square with Saturn in the 10th house. Such planetary configuration is clearly indicative of public disorder and rioting. The modern technology like Internet played important role in spreading the weekend’s disturbances in parts of London. The London Riots were fuelled by Facebook and Twitter. This is also reflected by Mars in sign of communicative Gemini opposing Pluto.

Hindu New year chart of England
The Lord of Rising sign, Moon in the new year chart is placed with Mars in a watery sign and Saturn is aspecting the Moon-Mars conjunction. An unprecedented public disorder and rioting is signified here also.

United Kingdom Chart(1927)
So there are many factors visible in the aforesaid charts, however it is meaningless unless it is presented in the Country Chart as well. United Kingdom has Scorpio as the Rising sign as per Indian Vedic Astrology. Rahu (North node) is transiting through the Rising sign of United Kingdom’s Country Chart over the natal Saturn. Adding to this, the transiting Mars( symbol of violence, and conflict) is passing over the natal Mars, Rahu (North node) and Pluto in the 8th house ( house of loss, fear and distress). UK is passing through the Saturn Major period and Saturn sub-period. Saturn, the Lord of 3rd house and 4th house for
United Kingdom is retrograde and placed in the Rising sign. Such planetary configuration is clearly indicating crisis, violence, public disorder, lawlessness, looting and arson. Month of August looks very stressful for UK, however there could be a cessation of violence by 20th
August.