12 principle names of Shree Ganesha and their origin 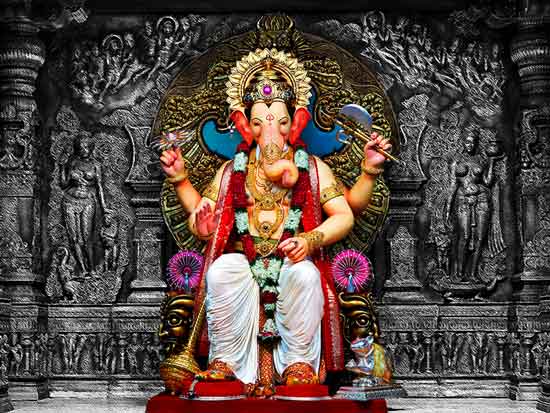 As per Hindu mythology, Lord Ganesha is called Vignaharta – the one who destroys all obstacles and problems. By receiving His blessings, one receives the grace of all noble beings, all celestial beings. He helps one succeed in whatever endeavour he takes up.
Lord Ganesha is known by many names and each name has a unique meaning and story attached to it.

1. Sumukh: He who has a beautiful face
Ganesha is known as Sumukh – possessor of a beautiful face. This may come as a revelation to some of you, but it is a fact based on the core definition of beauty. Beautiful things are pleasing to the eye and there is something new and unique about them every time you look at them. Same goes for Ganesha’s face. Every time you look at it, there something different yet pleasing about it. His face is known to be as fair as timber.

Since Goddess Parvati, who gave birth to Lord Ganesha, is an epitome of beauty, it was only obvious that he inherited some of her exceptional good looks. Also, it is believed that when Lord Shiva decapitated Lord Ganesha, his halo left his body along and merged into the moon. And when Lord Shiva brought him back to life by replacing his head with that of an elephant, the halo returned to his face. Thus, he came to be known as Sumukh.

2. Ekdant: He who has one tooth
Once Goddess Parvati went for a bath and asked young Ganesha to guard the entrance to the bath. Suddenly Parshuram appeared from nowhere and tried to go in. Ganesha refused to let him in and great Parshuram, who was not used to being ordered around by a kid, took offence. Thus started a war of words between the two. The harshness and utter disdain in young Ganesha’s address proved too much for Parshuram and he lost his cool. He attacked Ganesha. The blow didn’t kill Ganesha but he lost one of his two teeth. From then on Ganesha came to be known as Ekdant. It is believed that before this incident Ganesha was vengeful, but after this he will be an epitome of patience and good intentions.

3. Gajkarna: The one who has elephant’s ears
Ganesha is the Lord of the mind. The huge ears depicted in his idols signify massive brain size. One school of thought believes that the ears signify memory and mental ability of elephantine proportions. Also Ganesha has the head of an elephant, who have big ears. Hence the name, Gajkarna.

4. Lambodar: The one who has a large abdomen
Another name for Ganesha is Lambodar, which means he who possesses a large torso. Besides its anatomical significance, the name also signifies that the deity has the ability to stomach anything, however good or bad. Also, he has seamless ability to learn. He is said to have learned all the Vedas by merely listening to the sound of Lord Shiva’s damru, a small hourglass shaped drum. He learned about music by listening to the sound of Goddess Parvati’s ghungaroo while she danced. He took dance lessons by looking at Lord Shiva performing ‘tandav nritya’. Thus he had an insatiable capacity to consume knowledge.

5. Vikat: Intimidating
Ganesha is also known as Vikat, which means intimidating. The deity’s body is human and head is that of an elephant. So his appearance does come across as rather intimidating. Also, when confronted by trouble or roadblocks, he transforms himself into an intimidating force.

6. Vighnanashan: The one who ends all problems
Ganesha is known as Vighnanashak, which means the destroyer of trouble. So it is believed that you worship him before starting anything new.

7. Vinayak: The one who has the qualities to lead
Lord Ganesha is also called Vinayak, which means an incredible leader. Ganesha has the ability to set your soul free or give you ‘mukti’.
Although Lord Narayan somewhat owns the exclusive rights to give ‘mukti’, he never rewards anyone for worshiping him. However, Ganesha is an epitome of devotion and absolute liberation or ‘mukti’.

9. Ganadhaksh: Leader of Elephants
Lord Ganesha is known as Ganadhyaksh because he is the ruler of all those who serve Lord Shiva, Gan.

11. Gajanann: One whose face resembles that of an elephant
Gajanann means one with the head of an elephant. But an elephant’s tongue is unique as it doesn’t come out of the mouth. Also, all beings are known by their speech. This is particularly true about human beings. Good use of tongue elevates a man, and misuse of it leads to his downfall. But since Ganesha’s tongue doesn’t come out, it can’t be misused. Similarly, Ganesha’s nose, ears and eyes are auspicious as well.

12. Kapil: The one with reddish-brown skin colour
Ganesha is also called Kapil, which means brown. Just as kapila, a brown cow, gives white milk and milk products that are essential for human physical and mental health, Ganesha, despite his dark complexion, is responsible for the mental and physical well-being of human being. Also, Ganesha’s blessings immune you from all ills and evils.

You will benefit if you bring home, the Ganesha Idol Attuned By Bejan Daruwalla as you will invite prosperity and happiness!