Avasthas of Planets in a Birth chart 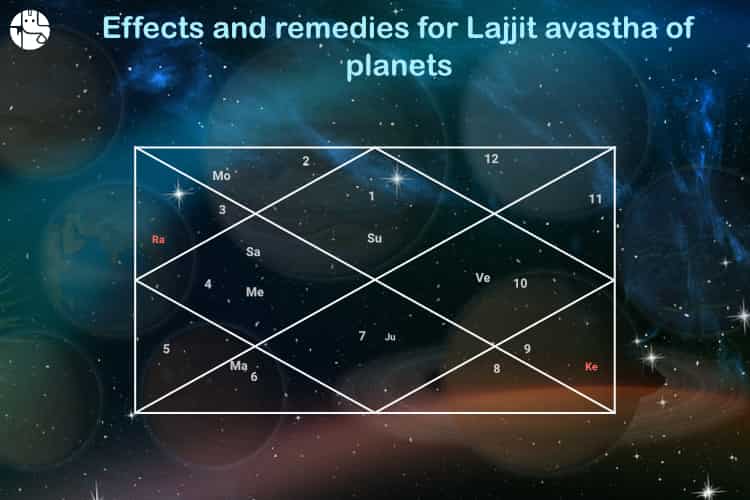 Did you know like we have Avasthas or states in our life, planets also observe their Avasthas? According to Vedic Astrology and Panchang, there are different 5 states or avasthas of planets as per their position in the birth chart of the native. They are as follows:

Baladhi avastha depicts the stages of life as an infant, young, adolescent, old and dead. Jagrahathi avastha shows the state of sleeping, dreaming, and awakening. Deeptahathi Avastha shows the contentment, joy, peace, distress, depression and angry state. Sayanathi avastha depicts the state of sitting, resting, crying, moving out and returning back. The fifth and last stage is the Lajjit Avastha.

When a planet gets coupled with any inauspicious planets in the 5th house, that planet is believed to be in Lajjit Avastha. This state is infamous and known as a bad state. In this state, the planet is able to give favorable results with constraints. Lajjit Avastha is divided into sub-states –

Each of the subdivisions of the Lajjithahati Avastha has some influence over the native.

It should be noted that in this state the native’s religious feelings deteriorate gradually. Small children often fall sick. A person’s logical ability and understanding is weakened. The native starts losing the aim of life and, hence, becomes agitated.

Remedies for Lajjit avastha of Planets

Planets play a vital role in our life. The nine planets, along with the sun and moon, can be the deciding factors of one’s character, personality, career, and overall growth. Towards this, your Janampatri helps you understand your innate characteristics and hidden potentials. Also, if the Panchang shows certain Lajjit Planets, you should not ignore it. It is always better to negate the effects of lajjit avastha of planets. Detailed analysis and consultation with an expert astrologer to find the remedies for such avasthas. With guidance and awareness, one can negate the influence of such planets and lead a successful and happy life.