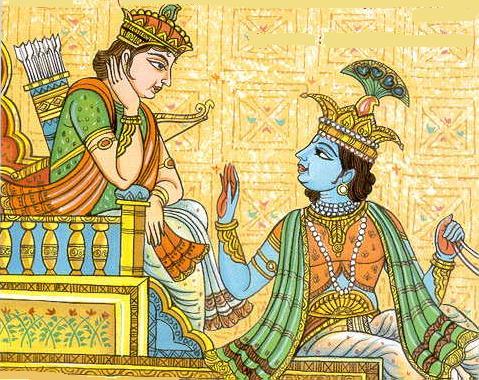 The 11th lunar day of the bright fortnight in the month of Margasheersha is celebrated as ‘Mokshada Ekadashi’ (Margasheersha Shukla Ekadashi) or ‘Gita Jayanti‘ in various parts of India. In Orissa and the south Indian states, it is known as Baikuntha Ekadashi. This day has been versed in scriptures as the day to worship the holy book, ‘The Bhagavad Gita’. No other religion in the world dedicates a definite day to their holy book.

There is a reason behind celebrating this day as ‘Gita Jayanti’. It is believed that on this very day, Lord Krishna gave Arjuna the religious discourse, which is the basis of The Bhagavad Gita when the latter expressed his reluctance in going to the war between Kauravas and Pandavas.

Arjuna, the greatest warrior in Mahabharata, had taken a vow to fight against the Kauravas on the battlefield of Kurukshetra. But just before the war was about to begin, Arjuna asked Lord Krishna, who happened to be his charioteer, to place his chariot between the two vast armies.

”Oh, Achyuta, please place my chariot between the two armies so that I can see the determined warriors present here.”

When Arjuna saw the faces of his kith and kin on the opposite side, he was struck by grief and despair, and he refused to be a part of a war that would lead to the death of his near and dear ones. The 700 verses rendered by Lord Krishna to dispel Arjuna’s uncertainty are known as ‘The Bhagavad Gita’. It was the day of Margasheersha Shukla Ekadashi.

Thus was born the invaluable religious scripture, which is also the essence of the Upanishads that have 700 slokas. A majority of these shlokas are the advice of Lord Krishna on how to live life. The Gita tells us how we should execute our duties, free of any desire or gainful motive, and without bothering about the consequences.

Lord Krishna advised Arjuna to put sorrow and happiness, gain and loss, and victory and defeat on an equal footing and be ‘sthitapragna’. One who sticks to such a lifestyle can get rid of rebirth and attain final salvation. Hence, this Ekadashi has been named as Mokshada (giver of salvation) Ekadashi.
You can now check if you have any doshas for which salvation needs to be done; check it with the help of your Janampatri

Mokshada Ekadashi was first mentioned and referenced in a conversation between Shri Krishna and King Yudhishthira.
King Yudhishthira was in doubt, and what should be the name of Margashirsha Ekadashi, which God should be worshipped, and procedure to worship God.
Lord Krishana praised King Yudhishthira for his question. He mentioned Margashirsha Shukla Ekadashi refers to destroying sins and is called Mokshada Ekadashi Katha.
On this day, Lord Vishnu should be worshipped with flowers, tulsi, ghee and incense sticks. He also told him a story mentioned in the Puranas referencing Mokshada Ekadashi. There was a King Vaikhanas who ruled a city, Champakanagar. Brahmins with Vedic knowledge lived in Champakanagar. One night he dreamt that his father was in hell. The following day he went to brahmins and narrated his dream. He told them his father pleaded to him to remove him from hell, and he was very disturbed because of it. He wanted to free his father from suffering. The brahmins asked him to visit Parvata sadhu, who knew about the past, the future, and the present.

King went to Parvata sadhu’s ashram; he told him about his dream and how he wanted to free his father. The king asked for a solution, and Parvata Muni asked him to fast on Mokshada Ekadashi during Margashirsha to free the father of his past sins. The king observed Mokshada Ekadashi fast with his family.

As a result, his father was liberated from hell, and he went to heaven. Shri Krishna told King Yudhishthira that Mokshada Ekadashi is the best day to fast. The one who observes this Ekadasi fast gets special merits. On this day, the one who fasts elevates himself on the spiritual or heavenly path never to come back to the hell world.
For this day can elevate one from hellish life to the heavenly planets. For one who observes Ekadasi for his spiritual benefit, this promotes one to go back to Godhead, never to return to this material world.”
Find out solutions by getting a Remedial Solutions in Personal Life Report.

Why Is Mokshada Ekadashi Celebrated

Mokshada Ekadashi is devoted to Lord Vishnu. Hence, Lord Vishnu and the holy scripture ‘The Bhagavad Gita’ are worshipped. In Hinduism, it is believed that Lord Vishnu frees us from the cycle of death and life.

Celebration of Mokshada Ekadashi stands for togetherness and asking for forgiveness for our ancestors for them to have a peaceful afterlife.

People observe fast on this day, read the holy book, and arrange for a get together where the teachings of the Bhagavad Gita are discussed with due devotion and solemnity.