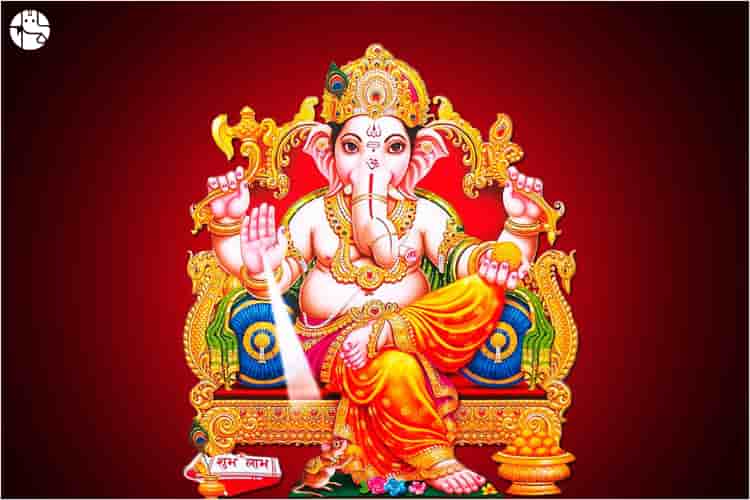 Before starting the tales, let us remember Lord Ganesha, the God of beginnings and remover of obstacles. No good deed should begin without his blessing.

When talking of Gods, who is the first God that comes to your mind, I am sure its Ganesha. He is the cutest, the wisest and the cleverest out of them all. You might have heard about Ganesha’s birth story a million times.

Do you know that there are many Lord Ganesha’s stories that you might have never heard before? For instance, why people worship Lord Ganesha before starting any auspicious ceremony?

All of these tales of Lord Ganesha are beautiful and divine. They teach us the right way of life and how one should use their brain in difficult times to turn the odds into favour. Here, we shall discover some of the popular stories about Ganesha.

If you ever wondered, what does Lord Ganesha represents? Its wisdom and wit. Our first story is about the same.

Story of Ganesha – God of Wisdom and Wit

Once, when Lord Shiva and Parvati was having “Fruit of Knowledge” son Kartikeya and Ganesha showed interest in having the fruit. To their wish, Shiva and Parvati gave them the challenge to complete three rounds of world and return.

The one completing the race first will get the fruit. Hearing this Kartikeya hurried on his Peacock starting the race. Ganesha knew that he could’nt beat Kartikeya in the race riding his mouse. Thus, he came up with an idea. Ganesha circled his parents and told them that for him, they mean the whole world. Shiva and Parvati were impressed by his witty reply and awarded him the Fruit of Knowledge. From that time onwards, Ganesha is known for Wit and Wisdom.

Lord Ganesha wrote the great mythological scripture Mahabharata and recited by sage Vyasa. Initially, when the sage approached Ganesha for helping him to write this epic book. He put a condition that the sage should not take any breaks while reciting the story. Sage agreed and asked Lord Ganesha to understand every line before writing it.

To Ganesha’s surprise, sage Vyasa started with great enthusiasm and continued it all along. However, in the middle of the book, Ganesha’s pen got broke. As a result, Ganesha found it challenging to keep up with the speed of the sage’s recitation. To cope with the Vyasa’s speed, he broke his tusk and used it as a pen. In the meantime, he also realized his arrogance of setting any condition at first.

He understood his mistake and started taking time to understand difficult stanzas so that sage gets some time to rest while narrating the epic Mahabharata. It took them three years to complete the Mahabharata.

This one is the most famous Ganpati Bappa story. Being the God of wealth, Kuber was a very snobbish man. Intending to show off his wealth to Lord Shiva and Parvati, he went to invite them for dinner. As Shiva had other engagements, he asked Kuber to take Ganesha with him for dinner. Shiva asked Kuber twice if he can feed Ganesha satisfactory or no. Kuber, in his pride, thought how much a child would eat, and said yes. So, Kuber and Ganesha headed to Kuber’s place.

Ganesha understood the intention of Kuber behind the hosting and decided to teach him a lesson. Ganesha ate everything at Kuber’s place and asked for more. When Kuber said that there is no more to eat, Ganesha threatens him that if he does not satisfy his hunger, he will eat Kuber. Terrified with the words of Ganesha, God Kuber went back to Shiva seeking help.

Listening to the story, Parvati gave him a Tulsi leaf and said that it would satisfy Ganesha’s hunger. Eventually, when Kuber gave it to Ganesha, he was pleased and satisfied. Kuber learnt his lesson and apologized to Shiva and Parvati for his arrogance and attitude.

Lord Ganesha is considered a God who likes eating. And, that is why he is very fat in shape. As per the mythological story of Ganesha, when Ganesha was returning from Kuber’s house after eating satisfactorily, he found it difficult to walk and fell on the ground due to his heavy bodyweight. Moon was witnessing all this, seeing Ganesha fell on the ground he could not stop but started laughing at him. Ganesha became furious to see Moon making fun of him. Thus, he cursed him to turn black and invisible. Hearing the wrath, Moon pleaded to Ganesha to take back his curse. Ganesha did not agree at once but, after some time, he tweaked the curse saying that the Moon will wax and wane every fifteen days.

Last but not least,

Get to know the reason why no auspicious ceremony begins without Lord Ganesha puja?

At the time of Lord Vishnu and Goddess Laksmi wedding, all the gods were invited except for Ganesha. Vishnu asked him to look after the Swarglok in the absence of everyone. Narad understood the trick of other deities against Ganesha and told him the truth that he was purposely asked to stay back as he is not good looking like other gods.

Ganesha got an angry hearing this and planned to teach everyone a lesson. He asked his Muskaha – the king of mice to ask all the mice to dig a hole under the ground in the route of Vishu’s procession. As soon as the procession came near to the hollow ground, they fell into a deep hole. A farmer came to their rescue and took Ganesha’s name before pulling the procession out. He successfully did it.

Gods were stunned by the act and asked him why he chooses to ask for Lord Ganesha’s blessing. The farmer said that Ganesha is the obstacle remover and before starting any big task, he asks his blessing. Gods realized their mistakes and apologized to Ganesha for their deed. Ganesha forgiving them joined the wedding ceremony. That time onwards, Ganesha is supposed to be worshipped before starting any auspicious event.

These are the most popular 5 stories about Lord Ganesha. There is no good time to start following the right path. Ganesha always guides his followers to live a life of happiness and truthfulness.