Lord Shiva is worshipped across the world in one or the other form. Known by various names such as Shankar, Mahadev, Bholenath, Rudra and so on, Lord Shiva is also known as a destroyer (of evil). The name Rudra, in the Vedas, is signified as a violent storm and the destroyer of all sorrows. It focuses on the aggressive side of Mahadev over his gentle side.

Lord Shiva as we all know stands for being forgiving and merciless, calm and aggressive, creator and destroyer! One of the mythological significance states that Bholenath is called Rudra because of Rudra Tandav nrithya.

It was the creation of the 11 Rudras that bestowed the name Rudra upon God Shankar.

It is also said that Lord Rama performed the Rudrabhishek Puja at Rameshwaram before killing Ravana.

What is Rudrabhishek Puja?

Rudrabhishekam Puja is an abhishekam for Shiva which is a holy bath of Shivling, worshipped in the form of Lingam, found in temples and at different places across India.

When to Perform Rudrabhishek Puja

Lord Shiva is worshipped on all days of the week, but Monday is dedicated to Lord Shiva. It is considered beneficial to worship Lord Shiva on Monday to get rid of all the troubles.

The mythological story behind the full moon reveals that Chandra, the Moon-god, had married 27 daughters of King Daksha who represented 27 nakshatras in the sky. Though he had married to all 27, he gave special and more attention to Rohini, which had upset his other wives. King Daksha was notified by his daughters, and he warned Chandra Dev several times, but despite repeated warnings, Moon God continued showering attention on Rohini.

Hence, a full moon appears once in approximately 15 days and performing the Rudrabhishek Puja on Full moon is considered beneficial.

Other Virtuous time for the Puja

Other Virtuous time for the Puja

Shravan Month, Shivratri / Pradosh (13th day of Panchanga), and Amavashya are considered the most virtuous for the Puja.

In the cosmos world, on your birthday, the celestial arrangement is aligned with your karmic deeds, and performing Rudrabhishek Puja on this day proves to be beneficial! Performing the Rudrabhishekam Puja on your birthday will remove any upcoming obstacles in the year ahead. It showers peace, prosperity and success all along the year!

Also, here are few other names of Lord Shiva, which you might not be aware of

Want to Know More about Vedic Rudrabhishek Puja Online, Talk to Astrologer and Get First Consultation with 100% Cashback!

Get Rid Of Incurable Diseases:

One of the main benefits of the Puja is if someone is suffering from incurable diseases, the Puja helps in warding off the illness and receives blessing in the form of good health and good energies.

Are finances giving you a tough time all along the way, and there is no light to be seen anywhere near?

Well, Rudrabhishekam Puja is the answer to these financial dangers.

Sins accumulated because of bad karma, or the bad karma that has been carried from the previous life. Rudrabhishekam Puja helps to mitigate it as well.

Be it any issues related to your career growth, business problems, or even issues with your love life or family life, Rudrabhishekam Puja helps find success and prosperity.

You may face many issues and obstacles in life if there are planetary doshas created in your Kundali / Birth Chart. The planetary combinations will not allow any positive things to happen in your life. Rudrabhishek Puja helps elevate positivity in your life and alleviates all the difficulties.

Rudrabhishekam Puja helps to get over the hidden enemies within yourself such as anxiety, depression, and other mental illnesses.

Nightmares, hallucinations, or any other evil thoughts and spirits can be warded off with the help of Rudrabhishek Puja

Lord Shiva controls all the Nine Planets & Time Phases. This includes the prime villains amongst planets ie. Saturn, Rahu, Ketu and Mars. He also controls the Moon, i.e. the significator of the Mind. Hence by pleasing Lord Shiva, you get a clearer mind, and the troublemaker planets do not bother you anymore

Performed by Trained and Experienced Pandits

Rudrabhishek Puja is performed by the most knowledgeable Vedic priests who are well-versed in the Vedic scriptures and are highly experienced in performing Vedic Pujas.

Online Puja is dedicated to the accurate and precise Vedic process, the puja mantras are in Sanskrit, and the entire Puja vidhi is personalised according to your needs and requirements.

Perform Customised Rudrabhishekam Puja from the comforts of your home itself, without any physical contact. Panditji will take your Sankalp to align with the Puja for the fulfilment of your purpose or desire.

Stay in touch with your roots and spiritually celebrate your ceremony with the energy and a very powerful aura, so that the results of the Puja is aligned with you and your family’s well-being.

Perform the online Puja and gain Health, Wealth and Prosperity, and Peace of Mind. Remove career obstacles, get protection from incurable diseases, lessen the influence of bad planetary combinations, and overcome fear and phobias.

What Will We Do During Live Rudrabhishekam Puja? 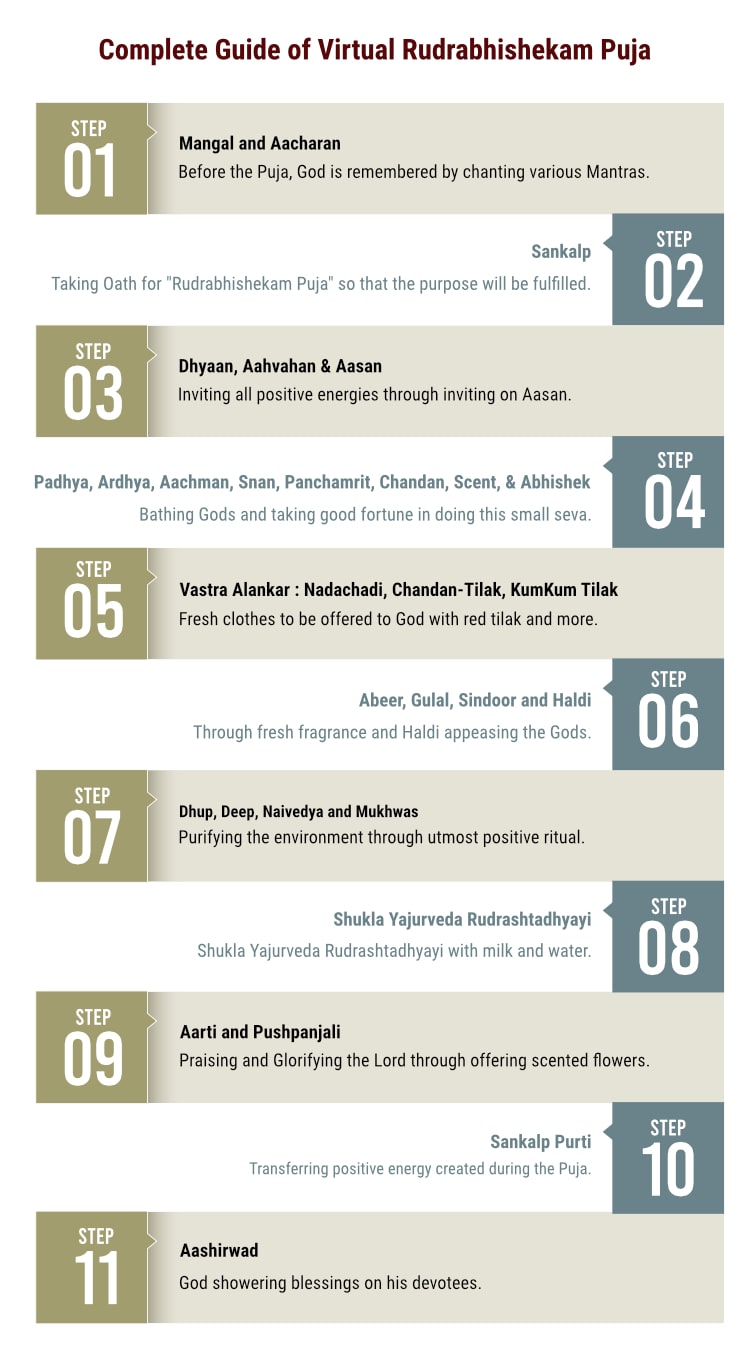 Thus, a proper step by step ritual is conducted, right from Mangal & Acharan to transferring the positive energy (Sankalp Purti) and Aashirwad towards the end.

Rudrabhishekam Puja can be performed for good health, wealth, and prosperity.

It is recommended for both your mental and physical health. Conducting virtual Puja helps to attain all your dreams and wishes. Along with that, you can seek blessings of Shankara with zero hassles and at the comforts of your home.

Additionally, Puja is performed with high-quality samagri and accurate Vedic processes by renowned Pandit to get desired results. Over and above, through personalized virtual Rudrabhishekam Puja, you can get rid of bad deeds, negative energies, and gain success in all the fields of your life.

How to Book Rudrabhishekam Puja

To book for the personalised “Rudrabhishekam Puja” online, you will need to enter the following details :

Take your smartphone, tablet, or laptop and enter these basic details, our team will assign dedicated Pandit ji to perform virtual puja with your Sankalp (purpose fulfilment). Surrender to the Almighty with unshakable faith without casting any aspersions on his divine powers to get showered by his blessings.

Note :- Puja is performed with high-quality samagri and accurate Vedic processes by renowned Pandit to get desired results.