Hindus Of Bali – Their Culture And Belief System 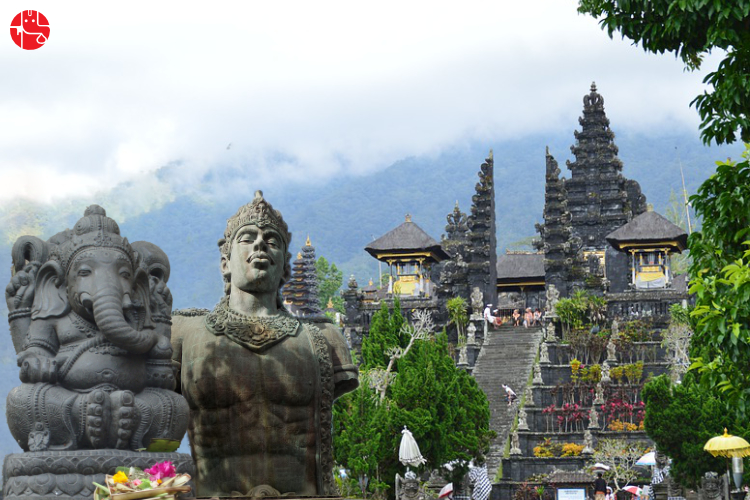 The religion of Hinduism has been considered to be one of the oldest, if not the oldest religion in the world. Even though it is widely spread across the Indian subcontinent, the religion is also followed in parts of South-East Asia.

One of the places that are predominantly ruled by Hinduism is the island of Bali. Surprisingly, although the islands of Indonesia follow Islam as their major religion (about 90%), the people of Bali following Hinduism constitute about 83% of the total population. However, this religion is not recognized in the same way as it is in the country of India. It is said that the Indonesian Ministry of Religion was greatly influenced by the Islamists after the country got its independence in 1945. Besides, they also imposed an acceptable definition of a religion that the country could follow as the constitution of Indonesia had assured people of choosing their religion. One of the crucial aspects was to adopt a monotheistic religion.

This is why a different form of Hinduism was cultivated by the people of Bali that was accepted as the official religion by the Government of Indonesia. Balinese Hinduism is a bit different then the Hinduism followed in India. Apart from some common gods and goddesses, Hinduism in Bali considers a designation of one god, which is referred to as Sang Hyang Widhi or Sang Hyang Tunggal. There are many other differences as well. Let us know more about Balinese Hinduism and its culture. Do you also want to know how will the Jupiter Transit affect you this year? Buy our Jupiter Transit Report now!

The Balinese Hinduism may differ from orthodox Hinduism followed in India but the common gods like Brahma, Vishnu and Shiva are worshipped in both the places. There are numerous temples on the island of Bali where gods like Shiva and Ganesha are also kept and worshipped.

As a matter of fact, the Hindus from Bali and India held various cultural meetings to form the true culture and religious views for Balinese Hinduism. Hence, they came about with the four main principles pertaining to Balinese Hinduism which are Catur Veda, Upanishad, Puranas, and Ltihasa. A joint petition was filed as well by the Hindus in Bali stating a Sanskrit mantra from the Hindu scriptures that reflected Hinduism followed by the people of Bali.

This translated as “ Om, thus, is the essence of all-pervading, infinite and undivided one”. Further, this also sufficed the condition of the Indonesian religion to be a monotheistic one, which granted them the official religion of Bali – Agama Hindu Dharma.

It is also believed that the culture and religion were formed by the rishis that had visited the island of Bali. They were Markandeya, Baradwaja, and Agastya, and they are still mentioned in the schools of Bali. Moreover, it is said that the schools of Bali make sure that the Gayatri Mantra is recited every day as they consider it to be one of the most important mantras from the Hindu Scriptures.

As per some sources, another influential event that took place was in the year 1011 AD at a place called Purasamantiga. In this event, traditional pre-Buddhists (Shaiva Agama), Pre-Hindus (Bauddha Agama), and Baliyagas (Balinese religion) joined their hands together to exchange information and form the religion of Bali which is practiced today.

Differences in the Bali Culture

As there are so many similarities in the Hinduism of India and Bali, there are a lot of differences as well. For example, the people of Bali have three main festivals that they celebrate. One of them is Nyepi Day or the Day of Silence, a very interesting concept celebrated in March. Usually, on this day, Balinese people observe a day of silence which means that people stop all their daily activities according to a set of some rules (that also includes “no fire”, “no entertainment”, “no activities” and “no travel”) and become completely silent.

Another festival, also popularly known as the “Galangan”, is celebrated for a period of about ten days. This festival is associated with the victory of Dharma over Adharma and is considered to be one of the most essential days in the culture of Bali. This is the time when spirits take over the land to whom various offerings and services are made.

Kuningan, which is observed as the last day of the 10-day festival of Galangan, is also a significant day as per the Balinese Hinduism. This is the time when the spirits leave the island and endow people with wealth, prosperity, happiness and peace of mind. Are you seeking a solution to all your problems connected to wealth and happiness? Get our Janampatri and know it all!

Watugunung, a festival affiliated with Goddess Saraswati, is also celebrated on the last day of the Pawukon Calendar (calendar followed by the Hindus of Bali).

There are numerous Hindu temples on the island of Bali, including the likes of Pura Besakih, Pura Tirta Empul (the holy water temple linked with Lord Vishnu), Goa Gajah (linked with Lord Ganesha), and many more.

There are also certain parameters taken into consideration while entering a temple. For instance, men are advised to wear a Udeng (headpiece), a white shirt, Kamen (dhoti), and Umpal (a waistband). Women, do not wear the Udeng, wrap themselves around the waist with a sash called Kebaya and carry a Sanggul (hair bun) decorated with flowers.

Additionally, they consider Brahma, Vishnu, and Shiva as a part of the same supreme being. They also worship Shiva in the form of “Batara Guru” and “Maharaja Dewa”. There are other gods and goddesses as well whose temples are built on the island of Bali like Dewi Sri (the goddess of rice), Dewa Baruna (the god sea), Dewi Danu (the water goddess), etc.

As far as rituals are concerned, the Balinese people read a handwritten script on a palm leaf while performing a puja which is called a Lontar. People of Bali also recite the Ramayana Kakawin and generally worship the book before it is recited. They also perform Bhumi Puja along with carrying a procession and worshipping the ground before reciting the same.

Thus, there are a lot of similarities as well as dissimilarities in the Hinduism followed by the Hindu people of Bali. Yet, there are various other influences as per the geography of the place too, which have played a major role in forming the religion of Bali, which is now called the Balinese Hinduism or Agama Hindu Dharma!