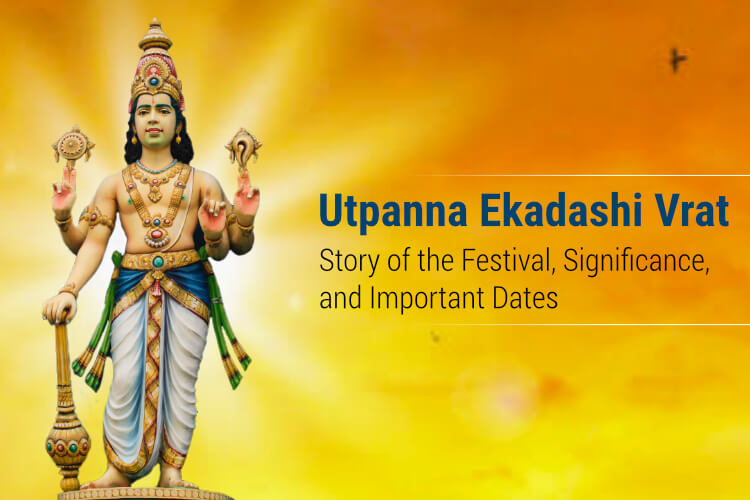 Ekadashi is considered as a method to cleanse the body and rejuvenate the mind by observing fast. In India, ekadashi holds a significant position for people who follow the rituals and pujas with devotion. The fast generally starts from the sunrise at the commencement of ekadashi till the next day. The timing of ekadashi varies with the position of the moon. The lunar calendar in India marks the progression from a full moon to a new moon, divided into 15 equal crescent. Each crescent is divided into tithi. The time it takes from the moon to cross a particular length of a lunar day is called the tithi. Ekadashi falls on the 11th tithi. On the brighter side of lunar month, the moon appears roughly about 75% on ekadashi while on the darker side of the lunar month it will be the opposite.

There are altogether 24 ekadashis in a calendar year. During the time of leap year there are two more ekadashis. Utpanna ekadashi or sometimes also called as utpatti ekadashi falls on the eleventh tithi in the margashirsh month during the Krishna Paksha. This is the first ekadashi that starts after Kartik Purnima. What is the story behind ekadashi ? Let us know the Tithi and timings, vrat katha and significance of this ekadashi.

As each Ekadashi is marked by the position of the moon, their timing according to the Hindu calendar changes. This is reflected in the different dates every year in the western calendar. In North India, the Ekadashi falls in the Margashirsha while in south India it is celebrated in the Kartik month. The timelines for Utpanna Ekadashi  2021 in North India are given below.

The legend Utpanna Ekadashi Katha is related to the birth of Maa ekadashi and how she saved lord Vishnu from a demon. There was a demon named Mura in satyuga. He conquered heaven after defeating lord Indra and his jewels. For help, the devgana went to lord Shiva. Lord Shiva suggested to go and take help of lord Vishnu. Lord Vishnu decided to end the dark rule of Murasura. The fight went as long as 10 years.  All other demons were killed, only Murasura was still surviving. Murasura could not be killed or defeated in the battle field.

Tired lord Vishnu went to Badrikashram. In the cave called Hemvati, he took rest and slept in the lab of Yoganidra. When the demon reached Hemvati, he attacked Vishnu. During that time one auspicious lady with a positive aura was born from the body of Lord Vishnu. She challenged Murasura for a fight and eventually killed him. When lord Vishnu woke up from his meditation, he was pleasantly shocked to see the death of Murasura. Please by this, Lord Vishnu blessed her and gave her the name of Utpanna Ekadashi and people will worship her.

Utapanna Ekdashi holds great significance in Hindu astrology. It is believed that people observing fast with pure heart and intentions will get salvation from their past sins. Not only that, it is also believed that one who wishes to observe the fast of ekadashi should start with fasting for Utpanna Ekadashi. As on this day, Lord Vishnu defeated Murasura with the help of Maa Ekadashi, this ekadashi is defined in relation to lord Vishnu. The tradition of worshipping Maa Ekadashi and lord Vishny and doing fast is done on the same day.  Following the rituals of this ekadashi shall erase all the sins of your life, both past and present. You will get closer to salvation or moksha. If one is observing fast on this day, then this fast is equivalent to keeping fast for all the tridevas.

How To Perform Puja Vidhi And Fast For Utpanna Ekadashi

There are two elements of this Ekadashi. Fast and Puja Vidhi. Let us know one by one.

People who want to perform fast must initiate from the early sunrise and should continue till the next day. Avoid eating food and donate to poors as per your capacity. The donation should be done before you finish your fast. Brahaman bhoj will help you get the benefits of fasting. This is considered to be highly auspicious and fruitful. To avoid any confusion or fear of not following the rituals, many devotees start their fast from one day before the ekadashi or take only sattvic food. The devotees can donate cloth, money, food as a means of donation. This will be highly rewarding.

Perform aarti after worshiping and distribute prasad. For prasad, a special bhog is prepared and offered to the deities in order to please them and gain their blessings. Devotional mantra ucharan and songs are part of this puja. Remember the puja should be done with a clean heart and mind with no malefic intentions. After the puja, it is necessary to listen to the Utpanna Ekadashi vrat katha related to the birth of Maa Ekadashi. If you wish to perform puja for any ekadashi, Book Free Puja Consultation!

For more effective results, the Vishnu Mantra ucharan during the puja is mentioned below.

Utpanna Ekadashi, is the first of all ekadashi and it carries a lot of significance in hindu vedic scriptures and folklores. The early mention of Utpanna Ekadashi can be seen in Bhavishyottara Purana, that is present in the dialogue between Yudhisthira and lord Vishnu. The importance of this festival is equivalent to auspicious events like Sankranti, where devotees gain several merits by performing the action of donation and charity. The fast observed on this day is equivalent to the fast observed for Lord Brahma, Vishnu and Mahesh altogether. Therefore it is very necessary, the fast should be performed with all the dedication to get the blessings and get rid of the sins of your past and present.

How Will The Planet-Induced Aggression In Nawab Malik Influence Aryan Khan Case?