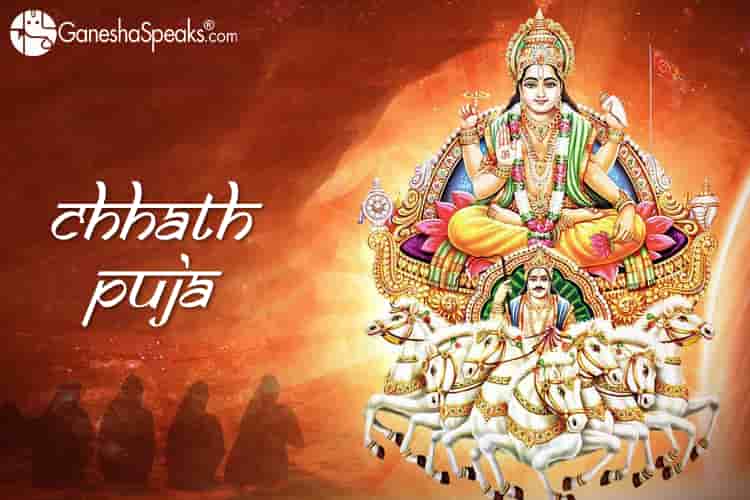 The sixth day of the Hindu month of Kartik, or the sixth day after Diwali is celebrated as the Chhath Puja to glorify the Sun God, Lord Surya, in order to seek blessings for health, success and progress. Besides, Lord Surya is also believed to cure innumerable deadly diseases such as leprosy. People wake up very early in the morning, take a bath – in the river Ganges if possible, or any other river nearby. They fast all day and many of them even stand in the river with half of their bodies immersed in the water for as long as possible on the day. This festival holds special importance in the Indian state of Bihar.  This year Chhath Puja falls on November 2, 2019.

The Story Behind Chhath Puja

It is believed that the son of the Sun God, Karna was the first one to perform this Chhath Puja festival when he ruled over the Anga Desh, now in Bihar, and then it was also performed by Draupadi and the Pandavas for resolving their problems and to regain their lost kingdom. On this Hindu festival, the kings used to call the pandits and perform the puja to get rid of their troubles and also to gain liberation. As per another legend, Lord Rama and Sita performed this puja after returning from their 14-year exile on the sixth day of the kartik month, and the tradition is being followed to this day on the same date. Buy the Mahamrutyunjay Yantra Golden Plated Golden Plated, solve your problems.

Rituals To Be Performed On Chhath Puja

1. Devotees bather early in the morning, preferably in a river and bring some water back to sprinkle it in their homes, which is said to purify the surroundings.
2. They take only one meal during the day, with the food being cooked only in bronze utensils on a fire made from twigs of a mango tree on a clay stove.
3. Devotees offer the Sun God kheer, puries and fruits.

The Benefits Of Chhath Puja

1.Chhath Puja cleanses and detoxifies the body. It also strengthens the body's immunity system, and cures a lot of skin infections.
2. Standing in the river with half of the body immersed in the water prevents the solar energy to escape and aids in the arousal of the kundalini shakti by activation of the various chakras in the body.
3. Such an accomplished devotee is able to pass on the energy not only to people in his/her surroundings, but also to the whole universe.

Big B Will Continue To Give Tough Competition, Predicts Ganesha