Team India coach: Shastri has an edge over Patil as stars supporting him are stronger, says Ganesha 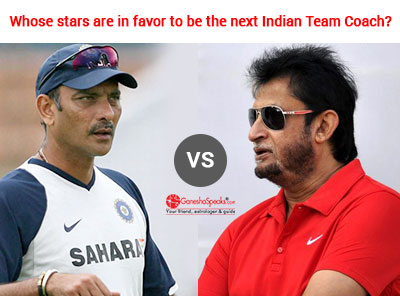 Both veteran, contemporary and extremely accomplished cricket players of their time, Ravi Shastri and Sandip Patil are scrapping it out for the highly challenging and conspicuous post of Team India’s coach. Both have a charisma of their own, both have done wonders for the Indian team as players. While Shastri shone with both bat and ball, Patil scintillated with his mesmerizing batting prowess. Both had their magic moments: Shastri when he smashed Baroda’s Tilak Raj for six sixes in an over in a Ranji match in 1985, and Patil when he hammered English pacer Bob Willis for six fours in an over in a Manchester Test match in 1982. Bob Willis was later to say no batsman in the world had ever plundered him so mercilessly. Ganesha takes a close look are both their charts and figures that Shastri has an edge over Patil for making it as India’s coach.

Ravi Shastri
Ravi Shastri has Sun placed in Taurus Sign in his Solar chart with retrograde Mercury. So, he is tactful, wise, affluent, firm, patient and obstinate. Mercury is in exchange with Venus. It makes him strong and ingenious enough to handle the adverse situations through his determined hard work and sharp mindedness. But, this makes him much inflexible in his attitude while providing the huge firmness in mind to succeed. He has Jupiter placed in the 10th House from the Natal Sun. So, he looks at every aspect before taking a new assignment and also ponders a lot before approaching which will keep him on the safer side. This further makes him confident from inside but quiet slow to act as he will pursue everything late but will be able to do it in the best way. Also, he has Mars in Aries. This factor makes him strong, most physical, vital, impulsive and most independent as well. He thrives on direct action and he loves the thrill of a battle. So, he has all the required abilities to become a successful Coach.Currently, the transiting Jupiter is passing through the 4th House from Natal Sun and aspecting the Natal Jupiter and Moon in the 10th House. The benefic aspect of Jupiter will help him to excel in his career as Coach and it will also inspire Team India to perform well in forthcoming series. However, the transiting Rahu in Leo may bring challenges and the Jupiter-Rahu conjunction in Leo may not augur so well for him particularly till the end of June 2016.

Sandeep Patil
Sandeep Patil has Sun placed in Leo with Jupiter. So he has superb leadership quality and can be a good coach who likes to take initiatives and has abilities to stand firm against odds and obstacles. The Mercury-Jupiter conjunction indicates that he is a good strategist and knows every aspect of game thoroughly. He is a dignified, courageous, affectionate, powerful, playful, optimistic, ambitious person and may help Team India to achieve better results. On the negative side, though, he can be quite demanding, intolerant, domineering or self-centered. He may like to retain his freedom and hence at times will be unable to make necessary adjustments and compromises with the Team Management. Currently, the transiting Jupiter is moving over the his Natal Sun-Jupiter and Mercury. This positive transit has inspired him to apply for the post of Team India coach. The transiting Jupiter will definitely boost his chances. But, the transiting Rahu in Leo may restrict his progress. However, it has power to provide unexpected favor. Also, the transiting Saturn is moving over the Natal Saturn and Rahu in Scorpio which may also have an adverse impact. He is passing through the Sade Sati period as well. So, his path to become Team India coach looks rather difficult. Considering the planetary influences in both the charts, both of them stand good chance to become Team India coach. However, Shastri has much better planetary support. Also, forthcoming transit of Saturn in Sagittarius will be favourable for Shastri whereas it will be a tough transit for Patil. So, Shastri’s performance as coach will be less controversial and more progressive.