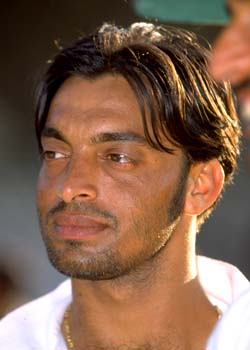 Shoaib Akhtar, the famous Pakistani cricketer has been banned and fined by Pakistani Cricket Board. He has been banned for 13 ODI’s and is currently undergoing counseling as part of his rehabilitation process. He was found guilty of violating the players’ code of conduct on four different occasions. Ganesha finds out what lies there in store for him as far as his cricketing career is concerned.

The Pakistan cricketer Shoaib Akhtar was born on 13th August 1975 with rising cancer Ascendant. Sun and Saturn are situated in the first house. The 5th lord Mars is aspecting 5th house in its own sign Scorpio. Thus he is recognized as the fastest bowler in the world, earning him the name Rawalpindi Express. Currently, transiting Rahu is passing through 8th house. Retrograde transiting Mars and malefic Rahu’s transits are unfavorable, which may cause a lot of problem. Ganesha views that his time is not favorable till April 2008. However, Jupiter transit may give him some amount of support from the end of current year. All in all, time will turn for the better from April 2008 onwards.

Ganesha blesses him with courage to deal with the situation courageously!