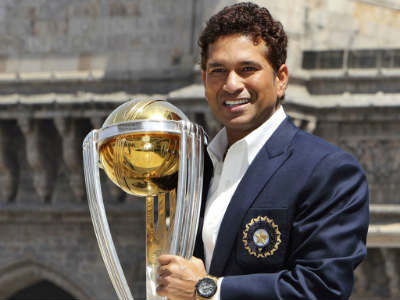 Sachin Tendulkar, one of the greatest batsmen of all time, still conquers our hearts even though he has retired from cricket. After reigning 23 years in the world of cricket, the living legend is all set to appear in the upcoming movie “Sachin-A Billion Dreams” directed by James Erskine, a London based award winning writer, director and producer. The film will also reveal few aspects of his life which have never been heard of or seen before. The release date for the movie hasn’t been decided yet but the teaser will go live on April 14th. And the most exciting story is that the film will capture Tendulkar’s cricket and personal life in great detail with Sachin himself featuring in the movie. Let's see what Ganesha has in store for the legend this year.
Sachin Tendulkar
Date of Birth: 24th April 1973
Time of Birth: 16:20
Place of Birth: Mumbai 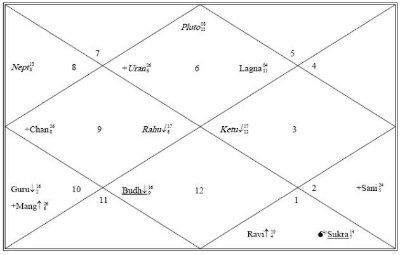 The Lord of the third house(house of enterprise)- Mars is exalted and becomes Atmakaraka, is a boon for a sportsman. It makes Sachin a ferocious warrior. Sun, the Lord of 12th house exalted in the 8th house, forms a Vipreet Raja Yoga that gives him immense fame and popularity. Saturn in 9th house aspected by Jupiter makes him the most popular youth icon. Debilitated Jupiter placed with exalted Mars in the 5th house clearly forms Neecha Bhanga Raja Yoga. Strong 3rd and 6th house Lords help him snatch victory from the jaws of defeat.
Sachin Tendulkar is currently going under the influence of Jupiter Mahadasha and Jupiter Bhukti. Jupiter is placed with Mars in the 5th house. So, even though Sachin has decided to hang up his boots, the Little Master will remain associated with cricket as mentor or coach. Though Sachin has a flair for communication and wealth of cricketing knowledge and experience, he might not be interested in commentary. He will rather remain associated with cricket administration. He may also play an influential role in cricket association or BCCI.  The transiting Jupiter will be passing through the Ascendant from mid August 2016. So, he will be active in public life as a Rajya Sabha MP. He will remain attached to various social causes and may also promote social services. He will continue to be in demand for brand endorsements and promotional activities.
With Ganesha's Grace,
Tanmay K.Thakar
The GaneshaSpeaks Team
Share