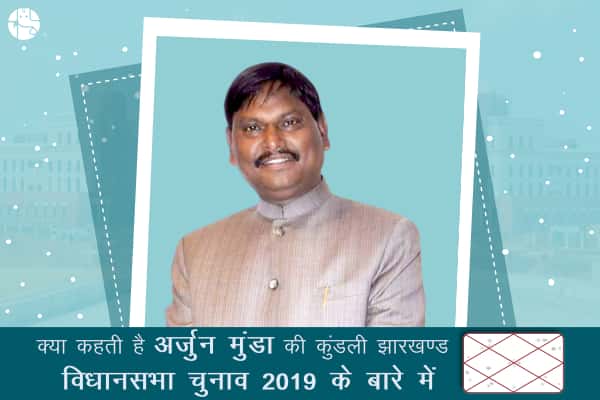 Birth Certificate
In the Kundli of Arjun Munda, along with Mercury and Venus, the Sun is in an exceptionally strong position at the time of birth. Sun is the planet of power and status. Hence this position of the Sun at the time of birth makes him a charismatic, influential statesman. They have a clear vision of finding solutions to problems with a positive attitude. He is very disciplined, hardworking and a serious leader toward goals.

Also, Jupiter is motivating Sun in their horoscope so they always keep expanding their boundaries to make them wider. This enables them to formulate effective strategies and engage efficiently with voters, which helps in garnering support. Mars is in conjunction with Venus which makes him a zealous leader and an effective politician. The exchange between Mars and Venus occurs through a Raja Yoga and also contributes to their popularity and status in the social and political sphere. However, the conjunction of Saturn and Rahu also signifies struggles and some failures. Such a strong planetary configuration in his horoscope has helped him to become the Chief Minister of Jharkhand.

Exalted Jupiter in transit gave him the opportunity to become the Chief Minister of Jharkhand in 2003. The strong Jupiter in his horoscope also helped in overcoming the unfavourable transit of Saturn at that time. He has consolidated his position in state politics after the year 2003 due to the auspicious “Jupiter Return” phase in his horoscope. However, the transit of Saturn at par with the Sun did not allow him to complete his second term as CM. He had to resign only after 18 months of his second term. The transit of Jupiter over natal Saturn and Rahu helped him to get the chair of CM again in the year 2010. Also, the transits of Saturn and Rahu helped him to consolidate his position. The Sun of Birth, the transit of Venus and Jupiter over Mercury were among the strongest factors for him, so his third term as Chief Minister was the longest. But, the transit of Saturn in opposition to the natal Sun once again did not allow him to complete his full term and he had to step down in 2013. Nevertheless, the strong planetary configuration in his horoscope helped him to remain an influential leader in the state of Jharkhand.

Current planetary transits and their prospects in the 2019 assembly elections
Presently, transiting Jupiter is moving in his favour. The aspect of Jupiter on the Sun of birth suggests that Arjun Munda will definitely play an important role in the upcoming assembly elections. His own strength will help the party get some important seats in the state. He will be able to position himself as an alternative powerhouse which will enable him to carve a niche for himself as a “leadership substitute” in the politics of the state.

However, the Shani-Ketu conjunction has the potential to bring back some initial problems. But still, they will be able to efficiently handle the challenges and manage their party well by making some significant changes in the political deadlocks. Despite all the difficulties, he can emerge as one of the strongest leaders in the politics of Jharkhand.