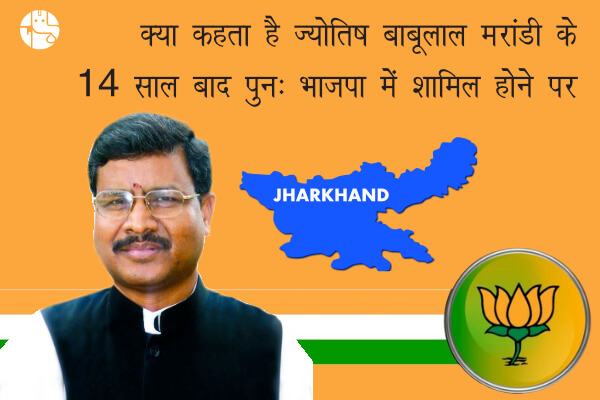 President of the political party Jharkhand Vikas Morcha, former Union Minister and the first Chief Minister of Jharkhand state, Babulal Marandi is going to join BJP once again. He made this announcement on 17 February 2020. Due to Marandi’s return to the BJP, the politics of Jharkhand is once again in the news. These days the stars of Babulal Marandi are on the rise, while on the other hand, the BJP has to face defeat in all the Lok Sabha elections held in 2019-2020 except for the Lok Sabha and only one state Haryana. In which Maharashtra assembly elections, Jharkhand assembly elections, and Delhi assembly elections are the latest examples.

But will the joining of Babulal Marandi affect the BJP’s political supremacy? Who will benefit the most from this alliance? And what can be seen in the politics of the Center and Jharkhand? Whereas at present there is no election process in the near term. The experienced astrologers at GaneshaSpeaks have tried to find the answers to all these questions. So let’s know, what are the stars saying on Babulal Marandi joining BJP?

What does the planetary transit position say about Babulal Marandi?

In Babulal Marandi’s Kundli, Atmakaraka Shani is in strong position with Matrikaraka Mars, forming a powerful Jaimini Raja Yoga. This yoga gives him the ability to make a powerful and influential leader. The conjunction of Saturn and Mars in Scorpio makes him a very capable leader, a good strategist, and also an efficient administrator. At the same time, it also provides them with a logical and analytical approach.

Amatyakaraka Sun is present in Sagittarius along with Mercury. This indicates that they have a decent amount of mental energy, and are able to think with complete clarity about what they want, and how they can achieve their goals. In addition, it inspires confidence and firmness about her faith. The energy of Sun and Mercury in the sign of fire element Sagittarius shows the possibility of making them independent thinker. So their opinion is usually very strong. They seem to be open to new ideas and improvements, which can be helpful to them in implementing strategic plans. However, they may boast of their opinions and ideas because of the negative effect of this combination. If their views are not given importance or sidelined, their ego with co-workers can get hurt. If his views and suggestions can play a major role in the development of the party, then he should put forth his views and suggestions. So it will be important that BJP assigns them importance and responsibilities according to their experience and capability.

In the horoscope of Babulal Marandi, Venus is situated in the fifth house. This makes him a charismatic leader and gives him success, fame and high position in public life. Since Venus is retrograde in the horoscope, he is facing political ups and downs. Whereas Jupiter-Rahu conjunction can cause some unexpected problems or obstacles. Are you also facing unexpected problems or obstacles in your office? So it could be because of Jupiter-Rahu conjunction in your Kundli. To know more about this position, get your birth chart analysis for free now!

How will Babulal’s political career be after joining BJP?

At present, the favourable effect of transiting Jupiter on Sun and Mercury is likely to be favourable for Babulal. The transit of Jupiter which starts in Capricorn on March 30 can also be beneficial for them. So they are going to join their parent party BJP with full preparation and great confidence. Since the Sun of birth is also away from the effect of Saturn transit. Hence their prominence and importance in local government can be felt. Saturn transit can bring you importance and prominence too, so get your personalized Shani transit report today and schedule your efforts and success.

With the joining of Babulal Marandi, the BJP’s hold in the tribal areas will be strengthened. Due to this the vote bank of the BJP will increase not only in Jharkhand but also in other tribal-dominated states. Which will help in broadening his image in the copy. His return to the BJP is likely to give him a bigger role in state politics. Babulal Marandi to be a face of active politics who would progressively work towards the upliftment of tribals in the area. As a result of which the majority of the BJP will increase. Which will help BJP to increase its vote percentage. Because it will be beneficial in regaining the trust lost in the people of the BJP. However, the effect of the transit of Rahu and Ketu can lead to some obstacles and difficulties. He may face stiff opposition from the BJP. Babulal Marandi may also have clashed with some people over his ego because of his dissonance with some of the BJP members. But still, the position of the planets in their horoscope is strong. Due to the position of the planets, there is a possibility of his return as a winner.