BJP Party President Has The Favouring Stars, But Does He Have His Back From His Own Party Members? 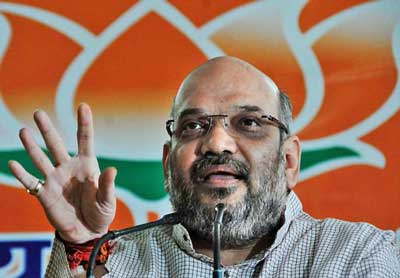 If someone deserves the Man of the Series Award for the 2014 Lok Sabha Elections, it is that man from Gujarat, Amit Shah. Following the political and strategic importance of the state of the Uttar Pradesh, PM Modi himself choose to represent one of the seats in the state and sent his best man to defend the vanguard. The dominance of the local parties in the state is extremely potent that the national parties like the BJP and the Congress look absolutely insignificant.

Amit Shah led the front in his own way to bag the unprecedented 73/80 seats in the state. Something, the political pundits could not believe even while the history was in the making.

Following his superiority, Amit Shah claimed the top position as the Party President following the General Elections 2014 for the BJP. While he achieved the “Mission Impossible” in 2014, it was deemed impossible. Realising the strength if the BJP leader, Nitish Yadav and his Mahagathbandhan has defended the state against the current BJP President. The party is suffering in the Upper House being the minority and desperately require more Rajay Sabha seats to have clear majority.

After the results of the Bihar elections, it is very critical for the BJP President to bring his A-game for the UP state elections.

What makes him such a prominent Political Leader?

Amit Shah is born with Virgo Ascendant and it is to be noted that Mercury happens to be the Lord of the Ascendant as well as the 10th House – which signifies Politics and Power which is ruled by the planet Mercury. Some of the natural characteristics of Virgo Ascendant individuals is their intelligence with abundance of logical aptitude, attention to details and excellent analytical skills. Additionally, Amit Shah has the planet Mercury placed in conjunction with the Sun in the second House of Speech; forming the Budh-Aaditya Yoga in the sign of partnerships – Libra ruled by Venus.

This overall placement makes him a formidable speaker with authority and extremely calm aura. Also, the placement of Rahu in the 10th House makes him an excellent strategist.

How would he fare in his role as BJP President focusing on UP state elections?

The natural signifier of the 9th House of Fortune will move from the 12th House to the Ascendant in August 2016 and begin a period of 13 months of luck and prosperity. Ganesha feels that period from August 2016 to October 2018 could be very comfortable and promising for desired success in all of his endeavours.

However, the adverse influence of the Ketu transit over the Natal Saturn (retrograde) through the 6th house shows difficulties and challenges from his own party members. Plus, special care and attention is required from unknown or hidden enemies.

With respect to the UP State Elections, in his role as the Party President, he will be at his very best. He will be appreciated for his stellar efforts and the chances of him to bring favourable results for the party are very high.