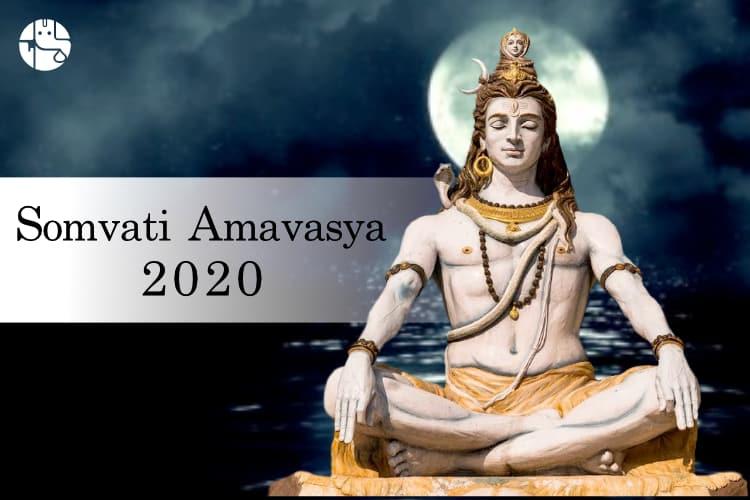 ‘Amavasya’ or ‘Amas’ means the New Moon day, according to the Hindu festival calendar. It is known to be the darkest day, and people conduct rituals and pujas on this day. It’s a rare occurrence of an Amavasya falling on Monday or Somvar, and hence it is referred to as ‘Somvati Amavasya’ or Somvati Amas. It is going to take place on 20th July 2020.

Somvati Amavasya is considered significant due to its occurrence on a Monday, the day of Lord Shiva, and hence people observe fast on this day. People also offer prayers to their ancestors on this particular day. So, Pitra puja is performed on the auspicious day of Somvati Amavasya. Additionally, one can pray for the peace of their ancestors’ souls after taking a dip in the holy river Ganga.

The epic Mahabharata mentions Bhishma Pitamah narrating the significance of Somvati Amas to Yudhisthira, the eldest among the Pandava brothers. When the Kurukshetra war ended, Dharmaraaj Yudhisthira was stressed about the future of the Kuru-Pandava dynasty. To seek advice, he met Bhishma Pitamah and asked how to revive the dynasty so that upcoming generations could prosper. It was Bhishma Pitamah’s suggestion that Yudhishthira should observe the Somvati Amavasya Vrat. This way, they could get the blessings of noble children.

There was a monk who used to stop by a moneylender’s home regularly. All the seven sons of the money-lender were married but not his daughter. The monk used to take alms from them and in return, he would bless all daughters-in-law to have a great marital life. But he never blessed the daughter about tying the marital knot and this saddened the girl and her mother. The anxious mother summoned a Pandit who could see the Kundali of the girl. The Pandit informed about the unfortunate Dosha wherein the girl could become a widow. To resolve this trouble, the daughter was asked to go to the island named Singhal where a washerwoman lived.

The girl was asked to fetch Sindoor from that woman, which needed to be applied on her forehead. Additionally, observing the Somvati Amavasya fast was also required in order to nullify the unfavorable Yoga from her horoscope. The youngest son went with her to the island, and they reached the seashore. But there was a sea to be crossed ahead.

Wondering how to cross the sea, they rested under a tree where a vulture lived with his female vulture and their babies. One fine day, when both male and female vultures had gone out to search food, a snake came near the babies. The girl and her brother saved the babies from that snake, after which the vulture duo offered help. They showed her a way to reach the washer woman’s house. The girl served the woman for months. The lady was pleased, and in return, applied vermilion or Sindoor on the girl’s forehead. The girl without drinking water left from there, and on her way back also observed the Somvati Amavasya fast. This way, her ill-fated Dosha got neutralized.

May the Lord bless you all with health, wealth, and prosperity.

Read Full Guide of Vastu Shastra
Use Numerology for predicting your future
Get Today’s Panchang – Tithi and Nakshatra
Zodiac Signs: Know All 12 Sun Signs
Learn astrology on a deeper level with Ganesha
Check Compatibility With Your Partner