The South-Indian (Tamil) Harvest Festival – Pongal and the Significance 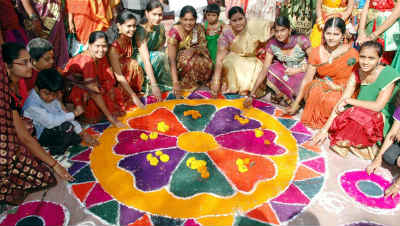 Pongal is one of the most important festivals celebrated by people in the Indian states, Tamil Nadu, Andhra Pradesh, the Indian Union Territory of Pudducherry, Sri Lanka as well as Tamils worldwide. Pongal corresponds with Makar Sankranti, the winter harvest festival celebrated throughout India. In Tamil, ‘Pongal’ means ‘overflowing’, signifying abundance and prosperity. It also has a sweet by the same name, made of rice and milk, which is served during the festival. This, ‘Pongal’, as in the food varient also has different types to it, both sweet and savory.

Pongal has astronomical significance, it marks the beginning of Uttarayana, Sun’s movement northwards, for a six month period. In Hinduism, Uttarayana is considered auspicious, as opposed to Dakshinaayana, the southern movement of

sun. All important events are scheduled during this period. This also corresponds with the time when Sun enters the 10th house of zodiac, Makara or Capricorn.

In Hindu temples bells, drums, clarinets and conch shells herald the joyous occasion of Pongal. Rice is cooked in new pots until they boil over to symbolize a bountiful harvest. Pongal is celebrated to convey appreciation to Sun God for providing energy to agriculture.

Margazhi Kolam
Rarely followed in cities, many villages in Tamil Nadu mark the arrival of Pongal festival a month before by whitewashing their dwellings and decorating their floor space with decorative patterns called kolam, which is generally done by the females of the household.

The day preceding Pongal is called Bhogi. On this day people celebrate new belongings and discard old posessions at dawn in a bonfire. In villages, the horns of their oxen and bufflo are painted and farmers keep medicinal herbs in the North-East corner of their fields to ward of diseases and pests.

In Andhra Pradesh, on the same day Bhogi Pallu is celebrated. Fruits of the harvest along with seasonal flowers are collected, often mixed with money and then poured over children. The children then seperate the money and sweet fruits and add to their collection kitty.

Lord Indra is also paid homage on this day for the rains and abundance of harvest, thereby bringing plenty and prosperity to the land. Another ritual Bhogi Mantalu is observed where useless household articles are thrown in the fire made up of cowdung cakes and wood. Girls dance around it singing praises of Deities, Spring and Harvest.

Thai Pongal
The main event during Pongal takes place on the second day of the four days. On the second day, a religious ritual or pooja is performed when rice is boiled in milk outdoors in an earthenware pot, and is then symbollicaly offered to the Sun god along with other obligations. When it starts to bubble and overflow, freshly harvested rice is added and the some participants blow a conch called sanggu, shout “Pongalo Pongal” and also recite “Thai Pirandhal Vazhi Pirrakum”. This is repeated frequently during the entire duration of this Festival. Then pongal, the food varient, is served to everyone in the house along with savories and sweet. All wear traditional dresses and markings, and the husband and wife dispose off elegant ritual utensils specially used for the puja. In villages, this ceremony is carried out simply but with a lot of devotion.

Maatu Pongal
Maatu Pongal is celebrated the day after the Thai Pongal. Tamils regard cattle as sources of wealth for providing daily products, fertilizers and labour for plowing and transportation. These cattle are treated with lot of affection. Multi coloured beads, tinkling bells, sheaves of corn and flower garlands are tied around the neck of the cattle and they are then worshiped.

Kanu Piddi is a tradition for women and young girls, during which, females feed the birds. As a part of the ‘kaka pidi, Kanu pidi’ feast, women and girls place a feast of coloured rice, cooked vegetables, banana and sweet pongal on ginger and turmeric leaves for cows to share and enjoy. They also offer prayer for the brother-sister ties to remain strong forever and pray for their brothers well being.

According to a legend, once Shiva asked his bull, Nandi, to visit earth and ask the mortals to have an oil massage and bath every day and to eat once a month. Inadvertently, Nandi announced that everyone should eat daily and have an oil bath once a month. This mistake enraged Shiva who then cursed Nandi, banishing him to live on earth forever. He would have to plough the fields and help people produce more food. Thus the association of this day with cattle.

Kaanum Pongal
Kaanum Pongal, the fourth day of the festival, marks the end of Pongal festivities for the year. The word kaanum means ‘to visit’ in this context. Many families hold reunions on this day, while, friends and relatives recieve thanks for supporting the harvest. Before taking their bath, all women of the house assemble in the courtyard, the leftover pongal, along with yellow, red coloured rice and ordinary rice is placed on turmeric leaves along with beetle leaves and nuts, two pieces of sugarcane and plantains. The womenfolk then pray for the prosperity of their home and its members. Another religious ritual is then performed using turmeric water, limestone and rice, and this water is sprinkled on the kolam in front of the house.

In Andhra Pradesh, Mukkanuma, the final day of Pongal is celebrated by worshipping cattle. This day is famous amongst non-vegetarians. People who abstain from eating non-vegetarian during the first three days of this festival, then enjoy non-vegetarian food on the day of Mukkanuma.

Thus Pongal is celebrated with great enthusiasm and fanfare in the state of Tamil Nadu and Andhra Pradesh.

Ganesha wishes all a prosperous Pongal!