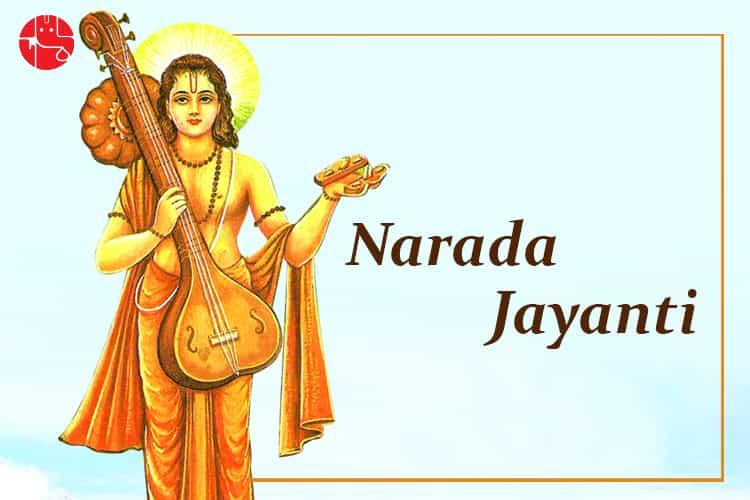 Narada or Narad Muni was God’s messenger and an important Vedic sage. Hindus, all around the world celebrate his birth anniversary as Narada Jayanti. Narada Jayanti will occur on Saturday 6th May, in 2021.

As mentioned Narada Jayanti will fall on 6th May, Saturday in 2023. It is usually observed in the Krishna Paksha tithi of the Vaisakh month.

Lord Narada was said to be the Manas Putra of Lord Brahma. Puranas consider him to be the son of Sage Kashyapa. He was also regarded an incarnation of saints like Thyagaraj and Purandaradasa. Being an ardent devotee of Lord Vishnu, he roamed around with a Veena chanting the name of his deity ‘Narayan, Narayan’. Narada was an important Devrishi who guides departed souls towards Moksha or salvation. He possessed powers which enabled him to travel through the three Lokas or Worlds mainly Aakash, Pataal and Prithivi.

Important timings on Narada Jayanti are:

Narad Muni or Devrishi was considered to be great devotee of Lord Vishnu and roamed the entire universe singing hymns in praise of his deity. He was not only intellectual, but also mischievous and often spiced up things between Gods and Goddesses to lighten up serious situations. He was known for gossiping and updating others with any news coming from every corner of the Universe. This trait has made him the first journalist on Earth and so his birthday is also celebrated as ‘Patrakar Diwas’.

Balance your life and relationships by getting accurate and instant answers to life concerns. Know how compatible are you with your partner with the Compatibility Assessment Reading and rekindle the spark in your relationship.

Narada Jayanti is often related to a legend following the birth of Narada. In his previous birth, Narada was a Gandharva (heavenly being) who was cursed to transform into an earthling. Thus, he was born to a maid who worked in the household of Vedic scholarly saints, who devoted their day in the devotion of Lord Vishnu. Narada often partook Prasad from them and he along with his mother served the saints to the extent of winning spiritual favors through their grace and compassion.Narada, who attentively heard their discourses got inspired to be a passionate devotee of Lord Vishnu. But after his mother’s death, he was heart broken and retreated towards the forest and started meditating with prayers he had learnt from the saints. Lord Vishnu was appeased with his devotion and appeared before him. But the Lord told him that he would only like to see him in his Divine form after his death. Thus, it became the dormant desire of a young Narada to be with the Lord.He continued with his austerities in earthly form until his death, after which he received his spiritual form, the form we know about him today.

Don’t let unwanted stress and tension disrupt the happiness and peace of your mind! Get Remedial Solutions For Personal Issues and re-create magic in your love, career, profession, health and finance.

The meaning of Narada is divided into two parts- Nara means ‘mankind’ and Da means ‘given’. In Hindu mythology, Narada means a deity who was invested by Lord Brahma with the power of creation.

Here are few points to be kept in mind while performing Pooja rituals on Narada Jayanti:

On Narada Jayanti devotees follow the given fasting rituals:

May The Divine Assistance Of Lord Narada Bring Peace and Prosperity In Your Lives!

Communicate with the most top rated expert astrologers through telephonic consultations and emails from the convenience of your home. Get Instant Personalized Solutions for problems related to all aspects of life.