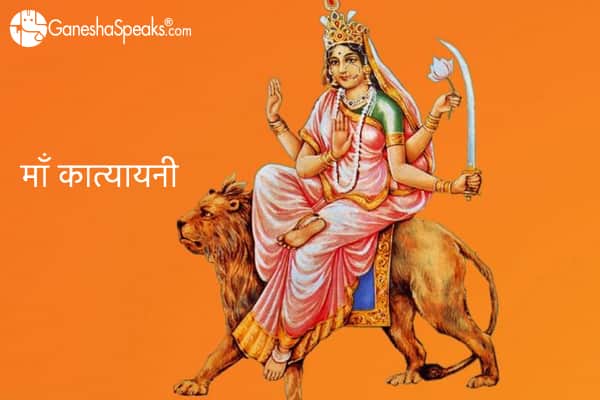 Maa Katyayani should be worshiped on the sixth day of Navratri. Their special worship removes the obstacles coming in the marriage of the girl child. It is said that the gopis of Brij worshiped Mata Katyayani to get Krishna as their husband. Devguru Brihaspati is pleased with the worship of Mata Katyayani and gives the boon of a good husband to the girls. Mother should be worshiped with this mantra written below. This day will come on 22 October this year.

Pleased with the penance of Katyayan Rishi, the mother took birth in his house as a daughter. Hence she was named Katyayani. The body of the mother is adorned with beautiful ornaments. His complexion shines like gold. Worshiping the mother eliminates any kind of marriage related defects.

After this, Mother Katyayani killed Mahishashur and freed the three worlds from its terror. The form of Maa Katyayani is very bright and gorgeous. He has four arms. The upper right hand of Maa Katyayani is in Abhayamudra and the lower one is in Varamudra. The sword in the upper left hand and the lotus flower in the lower hand. The lion is his conveyance. Mother Katyayani bought Shree Yantra (set in gold) today to get blessings.

Maa Katyayani likes red color very much. Honey is offered to them. She is very happy after eating honey. Mother’s simple mantra is Maa Katyayani Namah. Maa Katyayani is the presiding deity of Brajmandal. Mythological belief is that the gopis worshiped him to get Shri Krishna. Maa Katyayani is also worshiped for a good start of married life after marriage. According to the Devi Bhagwat Purana, the worship of this form of Goddess is very fruitful for householders and people who want to marry. If the people of Taurus and Libra zodiac worship Maa Katyayani, then all the problems will be solved. Actually the lord of both the zodiac is Venus. Venus is the significator of marriage and love. The compatibility of the planet Venus is also obtained by worshiping Maa Katyayani.

Maa Katyayani bestows boons and blessings on her devotees

Maa Katyayani is an enemy, so by worshiping her, enemies are defeated and life becomes happy. Whereas unmarried girls get married by worshiping Maa Katyayani. To get Lord Krishna as her husband, the gopis of Braj worshiped mother Katyayani on the banks of the river Yamuna. Therefore Maa Katyayani is also known as the presiding deity of Brajmandal. On the sixth day of Navratri, the devotee’s mind should be focused on the Agneya Chakra. If the devotee completely dedicates herself to Maa Katyayani, then Maa Katyayani bestows her immense blessings on her. Also, if the devotee worships Maa Katyayani with full devotion and faith, then he gets Dharma, Artha, Kama and Moksha very easily. If you want to know about the changes happening in your life during any transit then join us now for personalized free transit report and get proper guidance from our experienced astrologers.