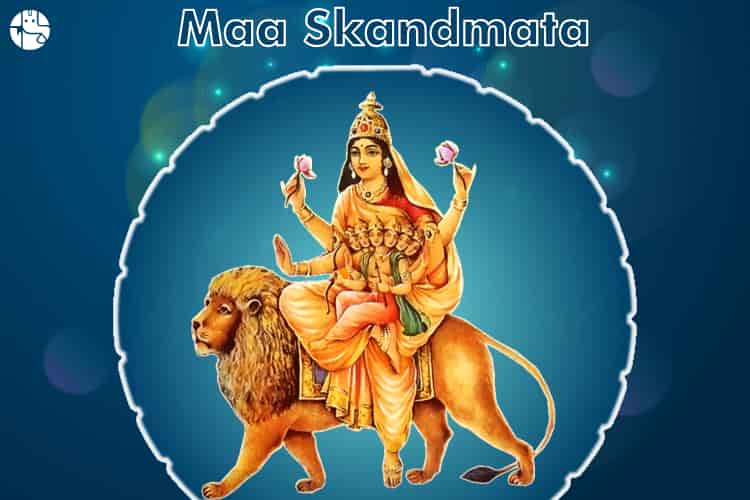 Maa Skandamata is benevolent and kind. She symbolizes the mother form of Goddess Durga. Maa Skandamata is depicted with four hands and Lord Kartikeya sitting on her lap. She rides a lion. Praying her means you are also worshipping her child. It is believed that Goddess Skandamata also governs the planet Budha. The Skandamata puja done on the fifth day of Navratri will bless the devotees with wisdom.

The Legend of Maa Skandamata

As per legends, when Lord Shiva and Goddess Parvati were meditating, their energies combined into a divine. It was foretold that the child born out of these energies will kill the demon Tarakasur, and thus, Lord Indra instructed Lord Agni to steal this divine energy. When Devi Parvati found out about Lord Agni, she got angry and cursed him to be an all-burner who will burn anyone who touches him and will not know the difference between right and wrong. The child born from that divine energy was the God of War, Skanda or Kartikeya, who went on to kill Tarkasur when he grew up.

In case you are unaware of the above rituals, let our renowned Pandits perform a personalised Puja for you.

Recite the below-mentioned Mantras to get the blessing from the almighty Skanda Mata.

The fifth form of goddess Durga is a symbol of the mother-son relationship who gives immense love and affection to her devotees. It is believed that worshipping Maa Skandamata brings salvation, power, prosperity, and treasures. You can also worship an attuned Shree Yantra to attain power and prosperity. Maa Katyayani, Kalaratri, Mahagauri, and Siddhidatari will be revered by the devotees in the upcoming days.