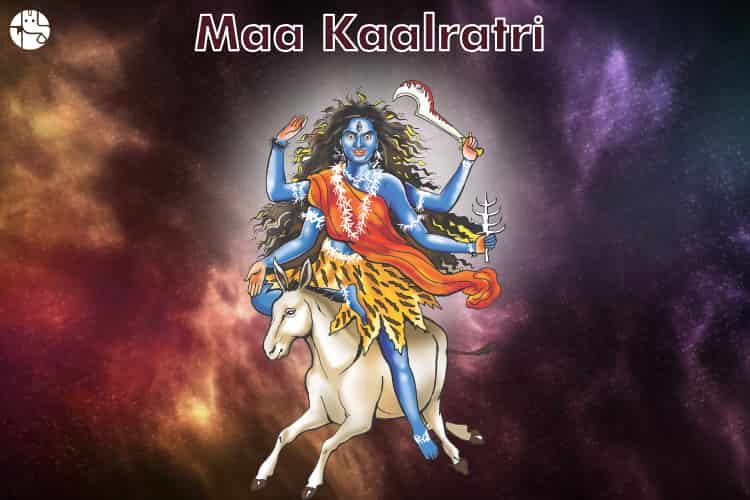 Goddess Kalratri is worshipped on the 7th day of Navratri, who is the seventh incarnation of Goddess Durga among Navdurga. It is believed that she is the most violent goddess among nine goddesses of Navratri.

7th day Navratri goddess, Goddess Kalratri has a dark (black) complexion like a dark night, tangled hair, and a very intense appearance. She is mounted on an ass. She is depicted with four hands. Her right hands are in Abhaya and Varada Mudra while she carries the sword and the deadly iron hook in her left hands.

The seventh day of Navratri has special significance because Navratri 7th day pooja is performed to awaken the powers and attain siddhis. Goddess Kalratri eliminates all types of fears, suffers and problems from the life of devotees and fills it with calmness, power, good status, and courage. You can also attain wealth and abundance with a Shree Yantra, attuned and energised by our expert astrologers.

The Legend of Maa Kalratri

When the Goddess Parvati removed outer golden skin to kill demons named Shumbha and Nishumbha, she was known as Kalratri Maa.

Kalratri Devi is the fiercest and most ferocious form of Goddess Parvati. According to Hindu mythology, Goddess Durga has to come into her most dreadful avatar – Devi Kalratri, to destroy cruel demon Raktabeej.No one in the Gods army could kill Raktabeej because one drop of his scattered blood was able to create another embodiment of Raktabeej. Goddess Durga has to come into Kalratri avatar to kill him. She kept a Patra (vessel) to keep and assimilate the whole blood of Raktabeej so that no more Raktabeej could come into existence for a fight.

As the seventh form of Maa Durga, Kalratri Devi is worshipped on day 7 of Navratri. Given below are date and time to worship Maa Kalratri in Navratri 2022.

Recite the below-mentioned Mantras to get the blessing from the almighty Maa Kalratri.

Performing necessary rituals and chanting of mantras are important for a successful Puja. A Puja performed with correct Vedic rituals and mantras can help you bring positivity to your life and do away with the negativity. Gain the maximum out of your personalised Puja performed by our adept Panditji.