Know About Ardh Kumbh Mela 2019: Its Importance, Legend & Other Facts 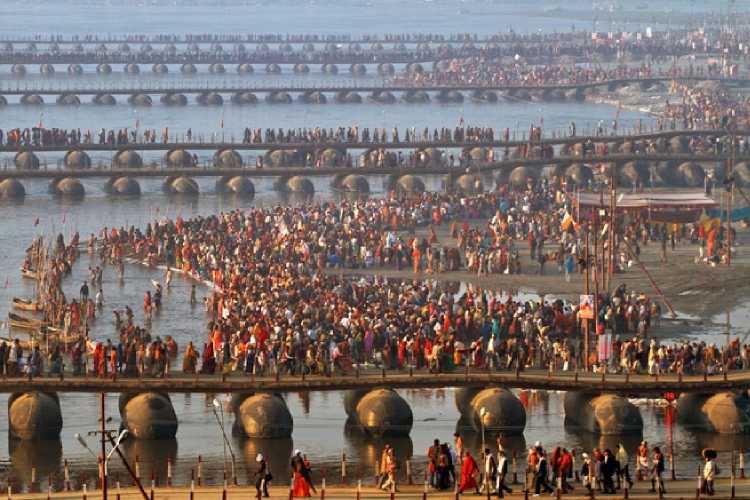 The famous, much awaited Ardh Kumbh Mela will be organised at Triveni Sangam in the holy city of Prayagraj (earlier Allahabad) (in Uttar Pradesh). The Ardh Kumbh Mela this year will commence with the Shahi Snan on Makar Sankranti (14th January 2019) and end with Maha Shivratri. (4th March 2019). Kumbh Mela is a major event, which helps people work out their karma and change their destiny for the better. During this festival, people take a dip in the holy Ganges in order to earn Punya (merit or good karma). Do you want to grow your wealth? Access the Wealth Ask a Question Report.

Taking A Dip In Ganga Can Liberate You

The Kumbh Mela holds a lot of importance in Hinduism and is organised once every 12 years. Between the two Big Kumbh Melas, an Ardha Kumbh is organised. The Yog (planetary positions) which forms on the Kumbh Day is known as Kumbh Snan Yog. As per the Indian tradition, taking three dips in the holy Ganges during the Kumbha or Ardha Kumbh can remove all the bad karma and provide Moksha (Salvation) to the aspirant.

It is stated that the Ganga river near Haridwar (at Har Ki Paudi) gets charged with medicinal qualities due to the planetary positions. In fact, the water of the Ganga river at Har Ki Paudi develops nectar-like qualities during the Kumbh Mela.
Kumbh Snan can even purify your inner self. That is why over a crore people come to take a bath at Prayagraj during Kumbh, which is known as the world’s largest religious congregation. From the spiritual angle, it is said that the planets help you increase focus and concentration during the Kumbh Mela. Are you concerned about some issue in career? Buy the Career Ask A Question Report and get the much-needed guidance.

As per the planetary position, Kumbh Mela or Ardha Kumbh Mela is organised every three years in Haridwar, Prayag, Nashik, and Ujjain (one place at a time). Actually, Kumbh Mela is organised based mainly on the movement of Jupiter and Sun. The day of Makar Sankranti (when Kumbh Mela begins) is considered very auspicious and special. It is also believed that the doors of Swarg (Heaven) open up on this day and those who take a dip in the Ganga can easily reach the higher planets.

The Legend Behind The Kumbh Mela

There are various legends associated with Kumbh Mela. There is a story during Sagar Manthan (Churning of the Ocean) which relates to the Kumbh Mela festival. Once upon a time, due to the curse (Shrap) of the great seer Durvasa, Devtas (Demigods) became weak. Taking advantage of the situation, Rakshasas (Demons) attacked the Devtas and defeated them. Then Lord Vishnu advised Devtas to carry out the churning of the ocean and find the Amrit.

As soon as Amrit was recovered from the ocean, Indra’s son Jayant took hold of the vessel containing Amrit and flew away in the space. After that as per the directive of Rakshas Guru Shukracharya, Rakshasas chased Jayant and snatched the Amrit from him. This led to a war between the Devtas and the Rakshasas. During this fight, few drops of nectar fell at four spots on the Earth. These places are Prayagraj, Haridwar, Ujjain, and Nasik. Thereafter, Lord Vishnu took the form of Mohini, a beautiful young woman and enabled the Devtas to drink Amrit, which made them immortal. Thus, Kumbh Mela is organised at four places where the Amrit fell. These places are the most blessed during Kumbh.

Kumbh Mela 2019: Dates For Snan And Other Activities