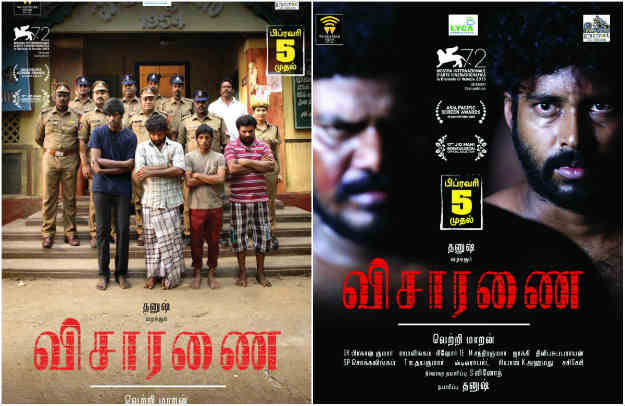 ‘Visaranai’ – our very own film from down South has given a shot for the Oscars. The film has been received very well by the average film-goer as well as the critic alike. Based on some elements from M. Chandrakumar’s novel – Lock Up, the film is said to depict how the ‘powerful’ misuse their power and mess up the lives of the ‘powerless’. In this article, Ganesha analyses the film’s fortunes and predicts whether it will be able to make it big at the Oscars.

Visaranai was released in India on 5th February, 2016, though, it was previewed in the Venice film festival on 12th September, 2015.

The trio of the planets representing art, dialogues and entertainment – Venus, Mercury and Moon, that too in the 10th House of success will prove to be the strongest factor working in the movie’s favour.

The biggest highlight of the Release Time Chart is the placement of three key planets in the 10th House and this configuration according to Ganesha is a very potent factor that will help the movie reach till the Oscar nomination stage. Also, the 10th House of success is receiving the benefic aspect of Jupiter.

Apart from the trio in the 10th House providing a favourable influence to the Chart, there is no other strong influence. It is to be noted that Saturn is casting its aspect on Jupiter and Rahu placed in the 6th House, as well as on the Sun, which is positioned in the 11th House. This indicates some sort of dissatisfaction (for the film-makers) as regards the performance of the film at the Oscars. Are you also facing some dissatisfaction in your marital sphere? Then try our personalised report – Marriage Ask A Question.

Considering all these factors, Ganesha feels that the film stands very few chances of winning an Oscar award as the Best Film, but it may bag some award/s in some other categories.