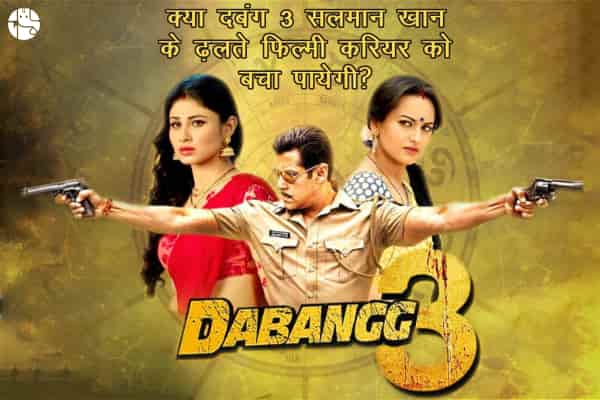 Actually, this story starts in the year 2010, a film by Salman Khan came ‘Dabangg’. Through this film, people got to see a new character in the form of Salman Khan. “Chulbul Pandey!” They called himself Robinhood. A policeman who taught a lesson to goons and criminals in their own language. The film did very well and got its name registered in Bollywood’s films that earning 100 crores. After that, the second film of the same series came ‘Dabangg 2’. Now once again on 20th December 2019, the third film of this series is coming, Dabangg 3!

But now the matter is whether this film will also be able to leave a mark on the hearts of the audience like its previous two films. This film also becomes very important because Salman Khan’s last three films ‘Tubelight (2017)’, ‘Tiger Zinda Hai! (2017)’ and ‘Race 3 (2018)’ did not perform as well as would normally expect from Salman Khan films. And ‘Tubelight (2017)’ and ‘Race 3 (2018)’ were badly rejected by the audience. Now after almost a year and a half, this film by Salman Khan is coming ‘Dabangg 3’. Not only the audience but the people working on it like the hero-heroine, director and producer have high expectations from this film. That’s why it becomes even more important than the film Dabangg 3 performs well and lives up to everyone’s expectations. But will this happen? Will Dabangg 3 be able to perform as per everyone’s expectations? This is what our experienced astrologer experts at GaneshaSpeaks.com have tried to find out. So let’s know the astrological analysis of the film Dabangg 3.

Will Salman Khan’s career resume after Dabangg 3?
In astrology, the planet Venus represents the arts, music, entertainment and film industries. As per the horoscope at the time of the film’s release, Venus is the lord of the 10th house of business and is situated in the 1st house. Mercury is the signifier of writing and story which is situated in the 11th house and is the lord of the 9th house. This planetary position indicates that all the other lead actors in the film including Salman Khan will be able to perform well. This film will also help Salman to increase his name and fame. The film will help Salman Khan maintain his superstar image.

What does the horoscope of Dabangg 3 say?

How successful will Dabangg 3 be?

Considering all the above-mentioned factors, Ganeshji says that Dabangg 3 will open positively at the box office. Cinemas in major cities will remain housefull during the initial weeks. The film will continue to do well at the box office in the initial weeks, which will help in doing good business. As far as the expectations of the lead actors, producers and directors are concerned, So the film’s strength will live up to their expectations. We can also see a little bit of influence of ‘Prabhu Deva’ as he is the one who directed this film. In short, the film Dabangg 3 will do good business in India and abroad. The film has both the potential and the potential to be in the 500 crore club.

If you also want to get success in your life then take advice from our experienced astrologers.
But will the film live up to the expectations of the audience?
As mentioned above, Moon, Venus and Mercury are in a good position in the horoscope of the film. Hence, the audience can expect good entertainment. Other lead actors will also try to give their best performance to please their audience. The conjunction of planets is also indicating congratulations and praise from film critics and other film evaluation companies. Shows the position of Venus in the horoscope That the song and music of the film will also attract the younger generation. That is, to say in summary, the film Dabangg 3 is fully capable of living up to the expectations of the audience.
Are you also not performing as expected in life, talk to our astrologer now, and get the desired solution!