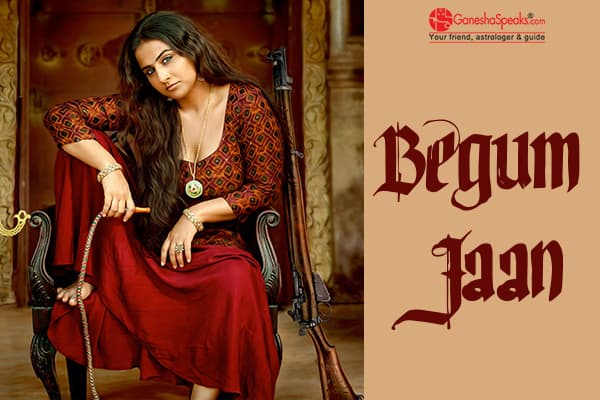 ‘Begum Jaan’ – the multi-starrer, Srijit Mukherjee starrer has generated a lot of interest amongst the masses. The biggest highlight of the film is the interesting starcast and the unusual plot. Begum Jaan will be hitting the big screens on 14th April, 2017. In this article, Ganesha takes a look at the starry picture and predicts that the movie will do well with the art-loving masses and will rake in moderate gains. Read on and find out the detailed picture.

Will Begum Jaan revive the fortunes of Vidya Balan in Bollywood?

In the Release Time Chart of Begum Jaan, the Lord of the 10th House Saturn is placed in the 8th House. Saturn’s dispositor Jupiter is placed in the 5th House in a retrograde state. It seems unlikely that Vidya Balan’s stars may start dazzling after the release of Begum Jaan. But, it is certain that her performance will be lauded in the film and it will bring her a lot of critical acclaim.

The starcast in Begum Jaan includes some big names of Bollywood. Will the performances turn out to be as big?

As stated earlier, retrograde Jupiter is placed in the 5th House. Plus, the 5th House Lord Mercury is also retrograde and is placed in the 12th House. Thus, this factor shows that the performances by the lead cast may be somewhat inconsistent. While some parts may be quite good, the punch may be lacking in other areas. The movie may not receive a very favourable response from the masses, but may win quite good critical acclaim.

What do the stars indicate about the overall collections of Begum Jaan in India and overseas?

The respective lords of the 2nd, 5th, 9th and 11th Houses are retrograde which shows moderate chances of success as regards the earnings of the film. Ganesha foresees average chances of success in financial income through the foreign lands. What do the stars indicate about your business prospects in 2017? Buy the 2017 Business Report for answers

Will Begum Jaan attract both mainstream and artsy audience?

Mars rules the 7th House in the Release Time Chart of Begum Jaan and it is placed in the 1st House. Venus, being the natural signifier of art is retrograde, but is placed in the 11th House in its Sign of exaltation. Ganesha feels that the film will be able to attract mixed audience, but may be accepted more by the art-loving masses.