Astrological Analysis: Saturn’s half-and-half is going on in Yes Bank! Will it sink? 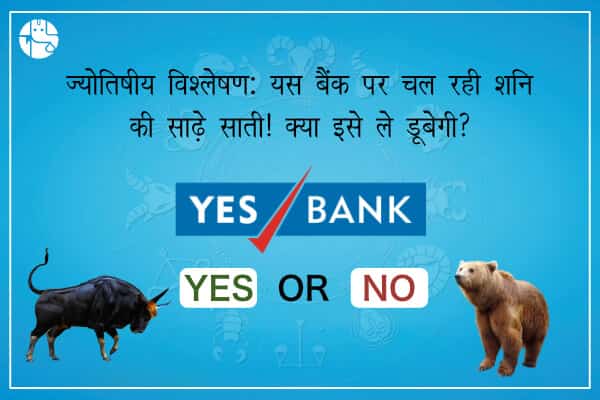 Yes Bank is once one of the fastest growing banks in India. After some time, today the same Yes Bank has come in the list of fastest falling banks in India. Well, there are many reasons behind this. But the biggest and main reason is the capture of banks by Rana Kapoor, the second founder after the death of one of its founders, Ashok Kapoor. After which Ashok Kapoor’s wife took Rana Kapoor to the Mumbai court. Where the verdict came in favor of Rana Kapoor. But since then the business of Yes Bank has not been in favor of Rana Kapoor. The second biggest reason for Yes Bank falling down appears to be NPAs! NPA means non performing assets. The NPA of the bank has increased so much that now it cannot give any more loans. Rather, now the situation has become such that instead of giving loan to others, the bank is requesting to take the loan itself. But the bank is not getting any debtor.

Due to all these circumstances, the condition of the bank remains very serious at present. Yes Bank whose shares used to trade above Rs 400. Today they are trading below Rs 35. According to Vedic astrology, there is a game of planets behind all this sequence of events. Therefore, the experienced astrologers of GaneshaSpeaks have analyzed the Sun horoscope of Yes Bank and tried to find out what was the movement of the planets, due to which Yes Bank is facing this difficult time today. Otherwise, at some point of time a bank with an economy of Rs 80000 crore would not have been reduced to just Rs 8000 crore today. So let’s know, the astrological analysis of Yes Bank!

Note: Surya Kundli has been used for astrological analysis due to unavailability of exact establishment time of Yes Bank.

Due to the influence of planetary positions, Yes Bank institution is facing difficulties in running its business. Although there is a ray of hope that the bank will be able to survive in the coming future, whether it will sink or not. But it will take a time period of two and a half to three years for the bank to recover from all these crises. The bank is trying its best to protect itself, and it seems that Yes Bank will get such an opportunity, so that it will stand even in this hour of crisis.

But till when these tough times for Yes Bank?

On analyzing the Surya Kundli of Yes Bank, it is known that at present the bank is facing the inauspicious effect of Saturn transit. Shani Sade Sati is going on in Yes Bank. That is why Yes Bank is facing so many difficulties and crises. Due to which the bank is struggling in both business and fame. But after March 2023, Yes Bank can get relief from this situation. But till then it may face some more challenges.

In such a situation, how is the movement of planets affecting Yes Bank?

Presently, Saturn is transiting over the Ascendant house in Surya Kundli. It is also adversely affecting the Sun of birth, so Yes Bank may face some difficulties towards the government authorities. Apart from this, it can also be affected by the changed rules and regulations in the banking sector. Jupiter is transiting Sun from the twelfth house in the horoscope, this house is also a factor of loss, which is unfavorable for Yes Bank. Hence there may be opportunity for financial loss in the current period. Due to which the financial pressure and crisis on the bank will increase. If you also want to improve your financial and financial condition, then know the remedy from our astrologer experts.

So will Yes Bank investors lose their entire money?

Due to unfavorable planetary transit order, the share prices of Yes Bank are falling slowly. This will surely impress the investors. Due to which investors may suffer financial loss. Some investors may even lose money. But by managing the stocks well and tactfully in the stock market, investors can avoid losses. If you also want to profit from share market, then know share market prediction from our experienced astrologers!

Then will Yes Bank be able to raise funds?

At present, Yes Bank is facing difficulties to raise funds. Many types of cooperation are also being sought by the higher officials of the bank. Also, the bank is seeking some help from international investors. But, as the planetary positions are not favorable for Yes Bank, hence the bank will not be able to raise the desired capital even after hard efforts. In this case, the bank can only see disappointment.

A Matter of Comfort

But it is a law of nature, that time is not always the same for everyone. Yes Bank once saw very good days too. When he was at the best of his business. Today the bank is having a bad time. But this time too shall pass! If the rest remains, then only the name of Yes Bank. If the bank has done good business then it will be able to stand again, and if it has done a messy scam like before, then the condition of the bank can go from bad to worse.