The Mahayuti of 6 planets will have a very bad effect on the stock market, will there be more risk these days? 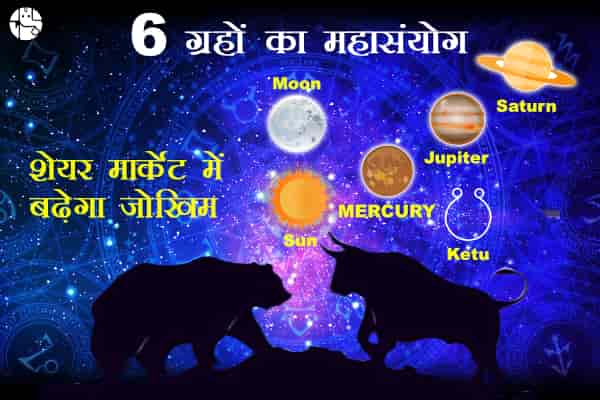 Before investing in the stock market, know the effect of Mahayuti of Sun, Moon, Jupiter, Mercury, Saturn and Ketu.

From 16 December 2019 to 16 January 2019, the totals of some special events are being formed in our solar system. During this time period there will come a time when Sun, Moon, Jupiter, Mercury, Saturn and Ketu will converge in the same zodiac or in one house. According to Vedic astrology, such a situation of the rare planets in the solar system becomes special because of this. Because during this time the effects of all the planets mix and affect the creature through a powerful energy. The effect of this astronomical event is not only limited to beings, but its effect is visible on every means associated with them. In order to accurately assess its effects on the common man, it is necessary to know that in which house and in which zodiac this Mahayuti or Mahasanyog is being formed.

Evidence of the influence of the planets present in the universe on Earth and organisms, thousands of millions of kilometers away from us, can be gauged from the phenomenon of tidal turbulence in the vast ocean. Breaking its shores, when the sea begins to swallow the land around it, then it is only the effect of the increasing effect of the moon behind it. When a planet as small as the Moon can stir up an ocean covering 75 percent of the Earth’s surface, how much more powerful and more powerful planets than the Moon would have on living beings and their conditions. It is no more difficult to guess. Vedic astrology is the science of calculating the effects of planetary energy on living beings and their situation and assessing their auspicious and inauspicious effects and providing proper solutions to the person. Through astrologer, we can assess the positive or negative effects of other planets not only on human beings, but also on every thing in the world, like the moon. Planets and constellations also play an important role in the economic, social and political developments happening in the country and the world.

The effect of this great combination of planets affecting every sector and every section of the country and society will be seen in the stock markets of the country and the world as well. There will be a lot of movement in the stock markets when these planets are together in one zodiac sign. During this time the movement of the market is going to be strange, so be careful! And invest with patience. The time taken from the formation of this supercontinent to its dissolution can be risky and unpredictable.

If we talk about 05/01/2020 to 18/01/2020, then during this time you should avoid investment risk. This phase of planetary conjunction will be the most dangerous and bustling. During this time both long term and short term, investment or profit-booking will be equally risky. In short, “Anything can happen!” For the past 2 years, GaneshSpeaks.com under the guidance of Senior Astrologer Acharya Dharmadhikari has been providing its readers with predictions about the possibilities of any major movement, bullish or bearish coming in the stock market. By the way, the entire time period from 05/01/2020 to 18/01/2020 is risky. But it is not possible for the investors doing intraday trading to stay out of the market for so long, so we have taken out some very risky slots. Day to day trading investors should at least not enter the market during this time period.

Talk to our astrological experts now to know the information and remedies of these effects of planets on your personal life!