Sundar future for Google and its new CEO...amidst some roadblocks. 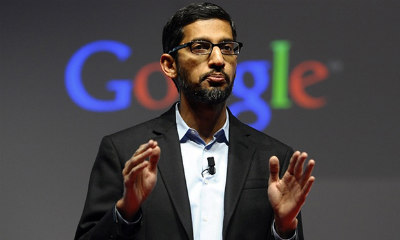 Ganesha’s peek into the future of Google’s-man-who-gets-things-done shows bright sparks of geniuses that will help him achieve all that he sets out to do, much like his past. Like life, there would be troubles, but then, for Pichai, the road to CEO wasn’t exactly a cake walk. His planets foretell a tale yet to be narrated. Read on....
Who does not know Sundar Pichai! Right from his two room apartment, to his middle class beginnings to his meteoric rise, every kid or aspiring techie would have his stats by heart, by now. And, recently Sundar fueled many a Silicon Valley dreams, as he was announced the CEO of Google.
Ganesha offers insights into Sundar’s future, which are largely positive, much in sync with his past. He also does a deep dive in the inspirational techie's Solar Horoscope to say what spectacular planetary positions helped him rise to the top....
Date of Birth :-   12th July, 1972
Time of Birth :-  Not Known
Place of Birth :-  Chennai, Tamil Nadu, India
SOLAR CHART

[Sundar Pichai's astro analysis and predictions are based on his Solar Horoscope (Surya Kundli), which was created basis his Birth date and place, as his Birth time is not available.]
Astrological Readings
Astrological Predictions
Planet-wise...
Non-Sundar Times, in between....
Sundar Strengths
Sundar will have to use his business techniques and capabilities of solving troubles wisely to prove his mettle. Overall, it is likely that Sundar will be able to strengthen Google’s existing business relations. His acumen will help him forge new relations for the Google group.
Google Troubles...
Ganesha feels that Sundar will have to evaluate the system of controlling the business problems faced mostly from the external bodies, sources, companies, competitors and technologies.
Sundar Times Ahead?
To be wary against...
Another tough period will start for him, post 18th August, 2017, when Rahu will be transiting through Cancer, over the Stellium of planets in Pichai's Chart in 2nd House. At this time, Ketu will be transiting through Capricorn, over Sundar's Natal Rahu, posited in his 8th House.
Ganesha forewarns that during this challenging phase, Sundar will have to be even more careful in maintaining professional as well as personal relations, his own health, Google's internal management problems, and also while taking decisions on crucial matters. In this time, he may have to face stressful situations, and his well-being will need careful guarding. Of course, the operating transit of Jupiter at that time will play an important role in protecting him.
Ganesha wishes a great time ahead to Sundar Pichai.
With Ganesha’s Grace
Rantidev Upadhyay and Kashyap Rawal
The GaneshaSpeaks.com Team
Share