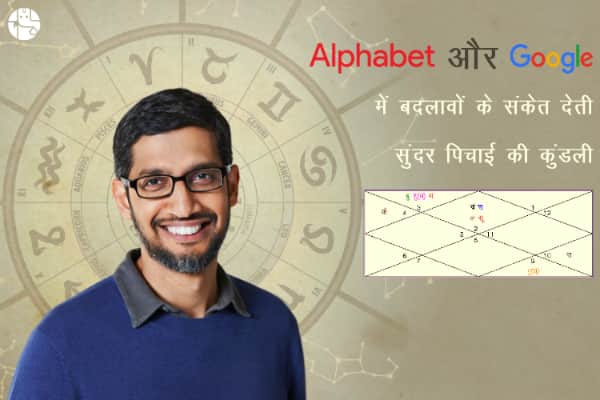 Born on June 10, 1972, in a normal family of Madurai (Tamil Nadu), Sundararajan Pichai is today working as the CEO of the world’s second largest tech company Google and its parent company Alphabet. Today the world recognizes him as Sundar Pichai. Pichai completed the journey of Google CEO in just 11 years on the strength of his passion for technology and his intellectual ability. Joining Google’s Product and Innovation Branch in 2004, Sundar not only worked on almost every major project of the company till 2015 but also took them to the pinnacle of success with his innovative ideas. While Pichai’s intellectual ability and innovation ideas supported him in his journey from a small town in the country to becoming the CEO of the world’s top company, on the other hand, according to the Vedic astrologer, his horoscope also paved the way for his success. Keeps working A thorough study of Pichai’s horoscope reveals that the planets present in his horoscope have been motivating Sundar to innovation since the beginning along with making him passionate towards his work.

Have a look at Sundar Pichai’s Horoscope

Looking at Sundar Pichai’s horoscope, it is found that there is a combination of Moon-Saturn-Sun in the first house. Mercury is retrograde, Venus and Mars are in the second house. Ketu is in the third house. There is retrograde Jupiter in the eighth house. Rahu is sitting in the ninth house. The tenth house is the most important in the horoscope, which gives status and prestige. The lord of the house of fortune is Saturn and he is sitting in the first house with the lord of mighty house, Moon. This position of the planets being formed in the first house of Sundar’s birth chart works to bring fame and success to the native on the strength of his deeds. The presence of Sun-Moon-Saturn in the Ascendant of the birth chart shows special progress in the field of Karma and attainment of a high position. Ascendant Venus is sitting in the house of wealth with the planet Mercury. Looking at this position of the planets, it can be said that at present the high position given to Sundar Pichai is the result of the direct and indirect position of these planets.

Talk to an astrologer specialist now to get solutions to problems coming in career!

If we talk about the existing transiting planets in Sundar Pichai’s horoscope, Rahu is traveling from Mercury-retrograde Venus and Mars in the house of wealth. Transit Mars is transiting in the sixth house. Transit Mercury-Sun is moving in the seventh house. Transit Saturn-Ketu-Guru is traveling in the eighth house. This position of transiting planets has a mixed effect on the career of the native. During this time, the person gets success by leaving the old ways and following the new methods. The native gets the benefit of this position of planets in the form of increase in self-confidence. Increased self-confidence will help in achieving complete domination over any situation or people. However, this position of the planets will not always give positive results and they may also have to face some obstacles related to their career in the coming time. But these difficulties will not affect them for long and eventually success will come. This period will be full of ups and downs but the end result will be satisfactory.

By studying the horoscope of Alphabet Google CEO Sundar Pichai according to Vedic astrology, it can be said that in the coming times, Pichai will have to face both good and bad phases in his career. But they will be able to successfully handle both Google and their parent company Alphabet with their intellectual ability, innovation and leadership ability. Alphabet Google will reach new heights under the leadership of Sundar Pichai. Not only this, in the first house of Sundar’s horoscope, the combination of Moon, the lord of might, and Saturn, the lord of karma and destiny, will inspire him to bring revolutionary changes in Google technology. Overall, in short words, Sundar Pichai will remain at career heights on the strength of his intellectual prowess and ability to adapt to any situation. Due to his clear thoughts, we will move in the right direction, due to which the economic and business progress of both Sundar Pichai and Google is certain.

To get your personalized solution, Talk to an expert astrologer now!