The last solar eclipse of 2019 on December 26, will be seen here in India at this time 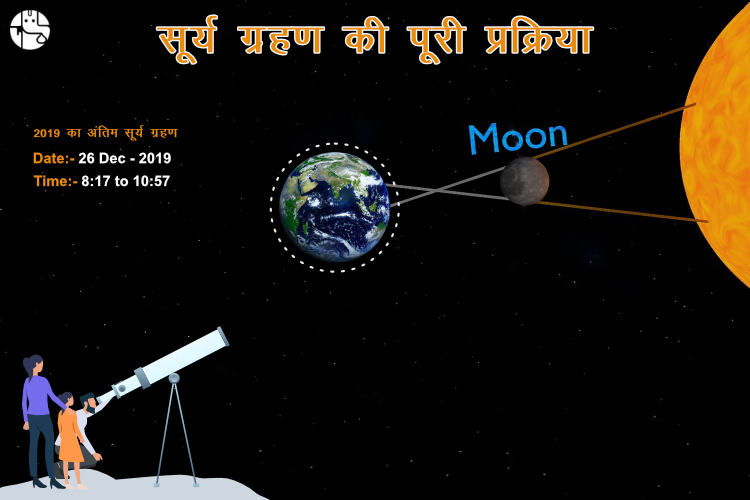 Like the vibrations emanating from the sound of Om, many interesting events happen day by day in this vast universe, spread to infinity. By the way, at present, we have been able to identify and mark only 12 zodiac signs, 27 constellations and some events happening in the solar system. One such event is the solar eclipse, which has been attracting mankind since ancient times. In general, when the Moon comes between the Earth and the Sun during its orbit around the Sun, this astronomical event is called a solar eclipse. It is worth noting that the Earth revolves around the Sun and the Moon revolves around the Earth, during this process sometimes the Earth comes between the Moon and the Sun, this phenomenon is called a lunar eclipse.

Last solar eclipse of the year on 26 December 2019

Talk to our astrologer now to get personalized tips to avoid solar eclipse!

Solar eclipse will be visible here in India at this time

The third and last solar eclipse of the year will take place on 26 December. This eclipse is also special because it will be visible in Eastern Europe, North-West Australia and East Africa as well as India. According to some astronomers, the solar eclipse of December 26 can be seen in Cheruvathur in the beautiful state of Kerala, India. The solar eclipse on December 26 will be visible from 8:17 am to 10:57 am. In this solar eclipse of about 2 hours 40 minutes hours long, from 9:24 the moon will start covering the edge of the sun and by 9:26 the moon will have completely eclipsed the sun which is called total solar eclipse or Khagras solar eclipse. According to scientists, this will be an annular solar eclipse, in this type of eclipse the sun appears like a ring of fire. Because in this type of eclipse, the Moon comes completely in front of the Sun, but due to its size being many times smaller than the Sun, it does not completely cover it and the outer surface of the Sun starts appearing like a lit ring. The view is very captivating and mesmerizing. But do not make the mistake of seeing it with the naked eye, because during this time the light falling on the earth can be harmful to the naked eye.