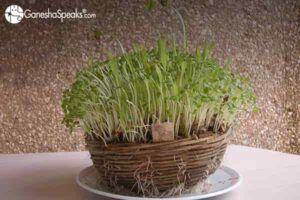 All of you must be familiar with the benefits of wheatgrass. According to Ayurveda, the juice of wheatgrass is very effective in the treatment of sunburn, bad breath and body odor, obesity, blood sugar level, cancer, facial pimples, acne and blemishes. But, here we will not talk about the benefits of wheat groats, but are going to throw light on its religious importance in Hinduism. According to Indian beliefs, when our creation started, the first crop was barley. This is called a complete crop. It is offered as food to the gods and goddesses during the Havan rituals. This barley (jawar) is grown by placing sand under it at the time of setting up the kalash, which is done during Navratri. This practice of sowing barley teaches us to always respect our grains and grains. That is why, we offer this first crop of the spring season to the Mother Goddess. The surprising thing is that the birth anniversary that emerges after 2-3 days of sowing barley in Navratri also indicates something about the future of the grower.

(Do you know how to do Navratri Puja according to your horoscope, contact our expert astrologers)

1. If barley grows rapidly then you are lucky and will lead a thriving life full of happiness and prosperity.
2. If barley has a light color then it is a symbol of prosperity of the house.
3. If the barley withers or does not develop properly, then consider it to be a sign of some untoward happening in the future.
4. If the birth anniversary turns red in contrast to its original color, then understand that you may be attacked by some disease or enemy. Caution is needed.
5. If the color of Jayanti appears yellow from below and green from above, then the beginning of the year is not good.
6. But if the color of this jayanti is just opposite to this, that is, the jayanti is green from below and yellow from above, then understand that the beginning of the year will be good, but the end can be somewhat painful.
7. According to popular belief, if your birth anniversary turns out to be strong, green and white, then your whole year is going to be good. After Navratri is over, keep this jewel in your granary.
If this wheat jubilee is giving inauspicious signs for you, then pray to Maa Durga to remove this trouble. On the coming 10th date, chanting the names of 9 planets, perform Havan 108 times. Perform Havan 1008 times while reciting the Beej Mantra of Maa Durga. After the havan is over, do the aarti of the mother and apply tilak on the forehead with a ghost. Maa Durga will protect you from all the calamities. With the blessings of Mother received in Navratri, your house will be full of wealth and food throughout the year. The importance of Navratri celebrations is innumerable. If you also want to try your luck this year, then do not forget to grow wheatgrass at your home.

(Do you know how to do Navratri Puja according to your horoscope, contact our expert astrologers.)