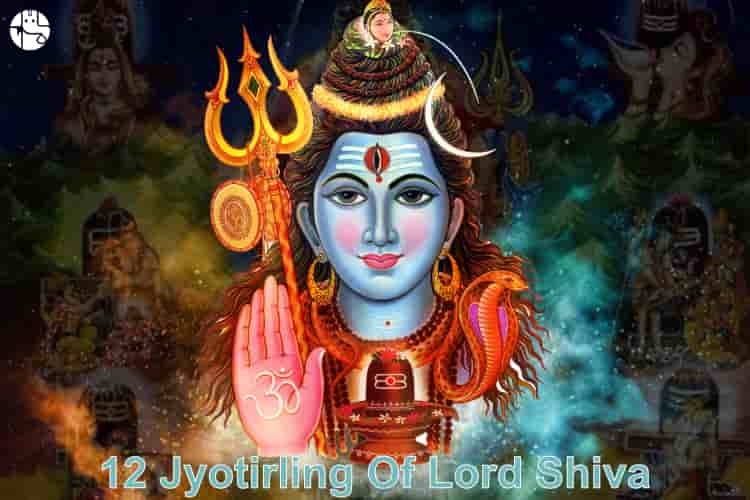 A Jyotirlinga refers to as a divine representation of Lord Shiva. In a literal sense, it denotes the Radiant Sign of The Almighty Shiva. These temples are the representation of the fact that Shiva appeared as an angry column of light when he as per Shiva Mahapurana, argued for supremacy with Brahma and Vishnu to settle the debate. The column of light is said to cool down into the Holy Mountain Annamalai.

It is said there were 64 jyotirlingas originally, but only 12 of these are considered as most auspicious and holy. All 12 Jyotirlingas have been named after the names of presiding deities. Each of the above is believed to be a different manifestation of Shiva. Every site has a primary lingam which stands for the beginningless and the endless pillar named the Stambha, which refers to the seamless Shiva.

The twelve jyotirlingas are:

1. Somnath Temple in Gir Somnath, Gujarat: It marks the beginning of the Dwadashi Jyotirlinga pilgrimage and is considered as the first site of the same. The temple has been rebuilt 16 times and has a rich history associated with it.
2. Mallikarjuna Temple in Srisailam, Andhra Pradesh: It is also known as the Srisaila and houses the Mallikarjuna in an architecturally rich ancient temple. The Jyortirlingum and the Shakti Peetha are usually kept together.
3. Mahakaleswar Temple in Ujjain, Madhya Pradesh: It is believed that the lingum which is at Mahakal is Swayambhu which is only one of the 12 sites. It is said that Shree Rudra Yantra is hanging upside down in the main inner temple.
4. Omkareshwar in Khandwa, Madhya Pradesh: It is placed on an island in the Narmada River.
5. Kedarnath in Rudraprayag, Uttarakhand: It is an ancient temple resting in snow-clad ranges of Himalayas and can be accessed only for six months annually. It has a rich legend associated with it. It is said Lord Shiva took form of a boar and had given in to Earth at this place only to appear at Pashupatinath.
6. Bhimashankar in Maharashtra: This is mired in controversies as there are many temples which are considered as the Bhimashankar as per different scriptures.
7. Vishwanath in Varanasi, Uttar Pradesh: It is considered as the most sacred shrine to Hindus and is considered the holiest of all the Shiva temples. The name of the main deity is Vishwanath.
8. Trimbakeshwar in Nashik, Maharashtra: This is linked with the origin of the Godavari river.
9. Baidyanath in Deoghar, Jharkhand: This is also a very sacred abode of the Shiva and has one main temple of Baba Vaidyanath and 21 other temples
10. Nageshvara in Dwarka, Gujarat: It also finds mention in the Shiva Purana.
11. Ramanathaswamy in Rameshwaram, Tamil Nadu: It is the southernmost Jyotirlinga temple in India and has the Ramesvara pillar.
12. Grishneshwar in Ellora, Maharashtra: It is also called the Dhushmeshwar Temple and again finds its mention in the Shiva Purana.

Every jyotirlinga is described by a specific shloka linked to it.

It is common and a cherished Hindu belief that anybody who visits the Jyotirlinga temples will definitely attain salvation and enlightenment. Literally the Jyortirlingum means a Lingum of Light and these are considered highly auspicious and have rich history and legends associated. One should visit at least once in the lifetime to get true blessings of Lord Shiva.

In order to know more about the significance of Jyotirlinga Darshan, Talk To Our Expert Astrologer.