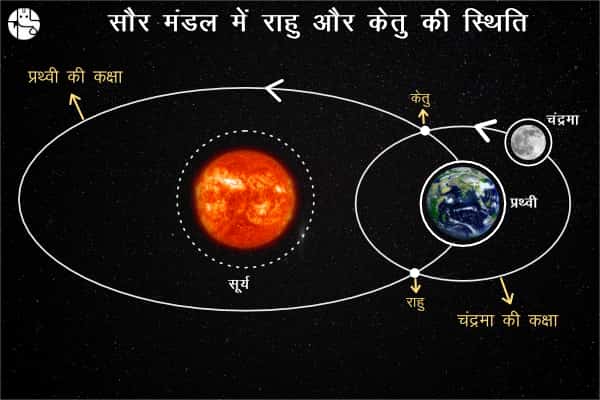 Rahu and Ketu are the celestial positions formed in the solar system where the orbit of the Moon intersects the orbit of the Earth. In English, it is called North Lunar Node and South Lunar Node. Rahu and Ketu are mentioned in Vedic astrology including Indian philosophy. In Indian philosophy, he has been called a dangerous demon, while in Vedic astrology, he is considered an important shadow planet. There is a negative perception about these planets in the general public, but in Vedic astrology, along with the negative effects of these planets, positive effects are also mentioned. The biggest strength or weakness of these shadow planets is that these planets do not exist directly in our solar system, but it is a condition that arises due to the intersection of the transiting orbits of the Sun, Earth and Moon. Let us try to understand it in detail in simple words.

Position of Rahu and Ketu in Solar System

Now after understanding the transit path of Earth and Moon i.e. orbit in literal and in the picture let us move one step ahead. When the Earth revolves around the Sun and the Moon revolves around the Earth, the transit of these two planets is happening simultaneously, then a permanent situation is created. The fixed orbit of the Earth and the fixed orbit of the Moon intersect each other at any two points at an angle of 180 degrees. Rahu and Ketu are the intersections of the Moon’s orbit and the Earth’s orbit. Understand the situation from the picture…

As shown in the picture, the Moon’s orbit intersects the Earth’s orbit at two points. This permanent position present in the solar system is known as Rahu and Ketu. Now to identify Rahu and Ketu separately in these points, you have to understand in which direction the Moon is orbiting the Earth when the Moon orbits the Earth from its fixed orbit and while descending, the point at which the Earth’s orbit is It bites is Ketu. In English the position of Ketu is called South Lunar Node. At the same time, when the Moon’s orbit crosses the Earth’s orbit while climbing up, it is called Rahu, in English it is called the North Lunar Node.

Rahu and Ketu affect people The concept of

By the way, some special concept remains among the general public regarding Rahu and Ketu. Like both Rahu and Ketu are dangerous planets and if they affect the horoscope of a person, then he becomes the part of misery. This general concept is true to some extent but not completely because Rahu-Ketu also gives positive results to human beings in many favourable situations. Understand this in such a way that, in Vedic astrology, the sun is considered as the soul of man, the moon as the mind of man and the earth as the body of man. Now when the position of Rahu and Ketu, these three means the Sun, the soul of a man, the Moon, the mind of a man and the Earth, the body of a human being, the three are in one state. When the soul, mind and body of a man are in one state, then he attains the highest state of spiritual practice. Not only this, but they are also seen by linking them to human DNA. If a person uses the effects of Rahu and Ketu in a positive direction, then Rahu-Ketu can give him the happiness of the three worlds which no other planet can give.