The group of Mars, Jupiter and Ketu being formed in the sixth house of the Moon sign Cancer horoscope, will affect in this way 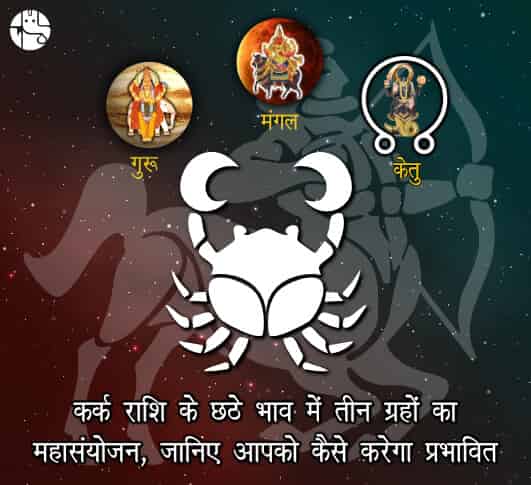 Cancer woman of Brahman varna of water element is the sign of cognition, polyp, equi, purge rise, night sacrifice and variable nature. Ketu, Mars and Jupiter are getting adjusted in the sixth house of Cancer. In Vedic astrology, considering Mars as the planet of fire element, it is considered a symbol of the might of Kaal Purush. Jupiter is the planet of the sky element, and it has been called the intelligence of Kaal Purush, while Ketu is a shadow planet and belongs to the air element. With the adjustment of the three planets with different qualities in the sign of fire element Sagittarius, its effect on the sign of water element Cancer becomes deep and significant.

Jupiter, Ketu, and Mars converging in the sixth house of the Moon sign Cancer horoscope will have deep effects in all areas of their lives. The adjustment of these three planets is happening in the enemy house of the horoscope. This house is related to things like pain of life, duration of illness, and job. Talking about your career, during this time you should avoid getting involved in the affairs of others. Do not make any statement in front of your superiors or higher officials, doing so may hurt the self respect or ego of your officer or boss. Your such behavior may create problems for you and you may have to pay the price in the form of non-cooperation for some time.

Due to this great combination happening in the sixth house of Cancer horoscope, you should use your words very sparingly on the business front. Expecting success during this time, you should make concerted and sincere efforts on your part, so that the pre-determined goals can be achieved. During this time period it will be better for you to wait your time and prepare a better policy for yourself.

The sixth house of the horoscope is directly related to the disease and its duration. Mars, Jupiter and Ketu are going to have a great conjunction in the sixth house of Cancer horoscope, it simply means that your health is going to be adversely affected during this period. During this time you should avoid doing anything so that your chronic pain or any past health problem does not bother you again.
To get your personalized solution, talk to an astrologer expert now!