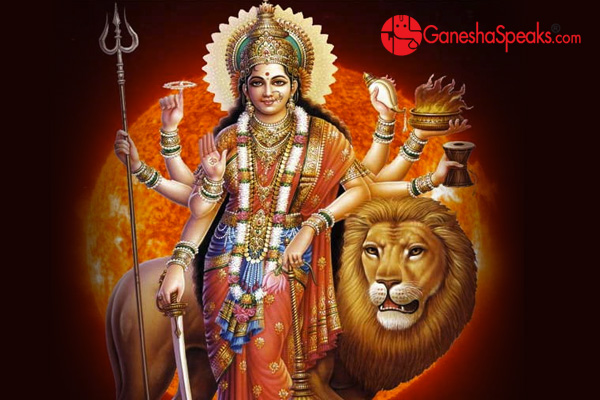 It is said that Maa Durga was created by all the gods by her power. In many places, she is also called the fierce form of Mother Parvati. The recitation of Durga Saptashati reveals the various forms of the mother. At the same time, we get to understand what are the forms of mother. Several mantras or shlokas of Saptashati is enough to get the grace of Mother Durga.

Many wishes of the devotees are fulfilled by Durga Saptashati recitation, but if a devotee cannot complete the recitation, then there are many types of legislation for them in the scriptures. By chanting many mantras of Maa Durga, you can get the desired boon from her. There are some such sources and mantras in Saptashati, whose duly chanting fulfills the desired wishes.

(If you also want to get the grace of Maa Durga and want to know which mantra is pleasant for you, you can contact our expert astrologer.)

To get rid of obstacles and get wealth, chant this mantra of Saptashati-
Sarvabadha Vinirmukto Wealth Dhanya Sutanvitah.
Do not doubt the future of human beings.

Goddess Durga herself has given to the deities the mantra which gives miraculous results of attainment of health and good fortune-
Dehi Saubhagyam, health in the body, supreme happiness
Roopam Dehi Jayam Dehi Yasho Dehi Dwisho Jahi

For heaven and salvation-
All the wise people have the institutions.
Swargaparvade Devi Narayani Namostu Te.

There is no specific rule for chanting these holy mantras, but it is necessary to maintain purity during the chanting. These mantras should be started on any auspicious day of the year by taking the name of Maa Durga, keeping your wish in front of the mother. There is no regulation of the number of chants, but it is believed that these mantras should be chanted for at least 108 days without interruption or stopping.

(Speak directly to our astrological advisors.)