The Conjunction Of 6 Planets And Its Effects 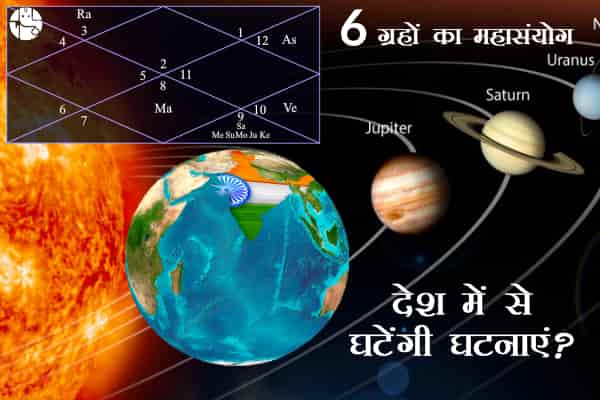 With the origin of Vedic astrology, it is being used mainly to assess the unpleasant events happening in the country and the world. In ancient times, many great astrologers made predictions about the year of India and many parts of the world, which not only proved correct with time. Rather, due to the arrangements made in advance to deal with those calamities, the loss of life and property could also be reduced to a great extent. From time to time, the planets and constellations present in the universe come in such a situation, which has a wide impact on the living beings on Earth in different ways. One such situation is going to be created during the coming 16/12/2019 to 16/01/2019. During this, the Mahayuti (Mahasanyog) of 6 planets is going to be formed. During this great conjunction of planets, many planets with opposite conduct will move together in one house. During this time the combined energy of these planets will be very intense and effective. The direct effect of this yoga of planets can be ascertained only by studying the individual’s personal horoscope.

Great conjunction of 6 planets being formed in December, its effect and solution on you

But the effect of this great coincidence will not be limited to humans only. Its impact is going to be different in different parts of the country and the world. The team of GaneshaSpeaks took the support of Acharya Dharmadhikari ji, the country’s well-known and senior astrologer of GaneshaSpeaks.com, to study the effects of this great conjunction of planets on India. He studied in detail the effect of this great combination of planets on the horoscope of India and tried to reach you many possibilities hidden in the future womb.

The above first horoscope is the horoscope of the establishment of the country of India, the second is the horoscope of India at the time of Mahasanyog. Means in one horoscope, what was the position of the planets at the time of the establishment of India, and in the second horoscope, the position of the planets has been told at the present time. In the second horoscope, you will be able to easily see that in the coming days, the great conjunction of planets is being formed in the 8th house of the horoscope of India. The eighth house of the horoscope is related to life, death, accident and loss. The combination of planets in this house indicates an unpleasant and unfavorable situation. In the context of the year of India, the time from 16 December to 16 January can be very difficult. The position of the planets is emerging during this period. It does not depict favorable circumstances, but represents unfair and unpleasant events. This joint transit of planets will start from December 16. From this day, all the planets will move one by one for the formation of Mahayuti. By December 26, this Mahayuti or Mahasanyog will be at its peak. After which this Mahayuti will start to disintegrate or disintegrate. This mighty Mahayuti will come to an end by 16 January 2020.

The last solar eclipse of 2019 on December 26, will be seen here in India at this time

On seeing the horoscope of India during the mentioned time period, it is revealed that this unfavorable Mahayuti of planets is being formed in the 8th house. Due to which the possibility of many types of calamities on the country cannot be ruled out. Due to this great conjunction of planets, there will be danger of epidemic, loss of life, war or such accident which takes time to emerge or sudden economic decline in the country. It is worth noting that in the past, there has been a huge decline in the GDP figures released by the government. Such government figures work to seal the negative effects of the Mahayuti, setting the outline for the time to come.

Along with this, due to this Mahayuti of the planets being in the sign of the element of fire, there will be a possibility of fire accidents at an increased level. Apart from this Mahayuti, Mars is also going to transit in its own sign. This transit of Mars strengthens the possibilities of events like earthquakes and volcanoes in the country and the world. The Moon will also be present for a limited time in this great conjunction of planets, indicating the loss of life and property due to sea waves (tsunami). After the analysis of the horoscope of Bharat Varsh, there are clear indications that both the end of the current year and the beginning of the upcoming new year are not going to be favorable for the country.

To get your personalized solution, talk to our expert astrologer now!
By the grace of Ganesha,

With the blessings of Ganeshji,
Acharya Dharmadhikari
Ganeshspeaks.com