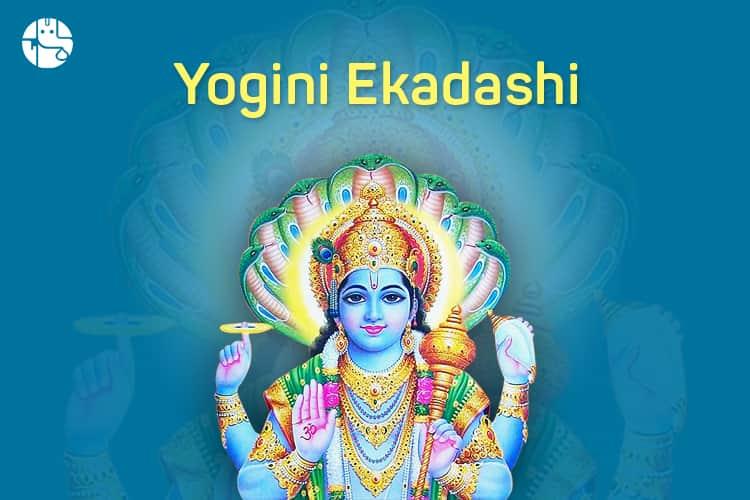 What is Yogini Ekadashi?

Yogini Ekadashi According to the Vedic lunar calendar is the eleventh day of each half-month. Every month has two Ekadashi days: one in the first half of the month, known as the Bright Fortnight, when the Moon is waxing or rising, and another one in the second half when the Moon is waning or fading, known as the Dark Fortnight. Yogini Ekadashi, which occurs in the decreasing period of the Krishna Paksha tithi, is normally observed in June or July according to the Gregorian calendar.
Yogini Ekadashi comes after Nirjala Ekadashi, which occurs in the month of Jyeshtha of the Shukla Paksha tithi and begins before Dev Shaymin.

Facing a monetary crisis in these trying times, invest in a Gold Plated Kuber Yantra to get rid of all stress related to the money issues.

On the day of Yogini Ekadashi, Shri Hari or Lord Narayan, one of Lord Vishnu’s other names, is worshipped. The day is significant for devotees who believe that the Yogini Ekadashi Vrat or fast gives them prosperity and joy in their lives. Since this fast occurs only once a year, those who observe it gain virtues equivalent to feeding 88 thousand Brahmins. According to the Padma Purana, everyone who religiously observes the Yogini Ekadashi rituals experiences meaningful life changes.

There are two Yogini Ekadashi Stories. One is Yudhishthir, the Pandavas eldest son, and the other is Hem Mali, the gardener of Kubera, the Lord of Wealth.

Lord Krishna had also counselled his cousin Yudhishthira, the eldest Pandava, on the significance of the Yogini Ekadashi vrat. Lord Krishna, Lord Vishnu’s Avatar on Earth, had stated: “Oh, king, I will tell you about the best of all fasting days, the Ekadasi, which occurs during the dark part of the month of Ashadha. It is known as Yogini Ekadasi, and it eliminates all types of immoral responses and grants ultimate salvation.

This Ekadasi carries people who sink in the vast ocean of material life and transports you to the shore of the spiritual realm. The day is the core of all holy fasting days in all three worlds. Fasting on Yogini Ekadashi is really strong and fortunate.

King Kuber was a devout Shiva devotee who offered flowers to the Lord on a daily basis. A Yaksha named Hem Mali worked as a gardener. He will get Kuber flowers from Mansarovar on a daily basis. However, he did receive the flowers but neglected to send them to Kuber because he was too preoccupied with his lovely wife. As a result, the king sent his servant to ascertain the true cause of Hem’s carelessness.

When Kuber found out, he became enraged and cursed Hem with the deadly disease leprosy and forced him to be divorced from his wife. Hem had left the palace and was suffering greatly as a result of the illness.

The hem came across the ashram of Rishi Markandeya after roaming for several years in the jungle, and after hearing his tale, he advised him to observe Yogini Ekadashi Vrat.

Hem Mali observed the fast with zeal and prayed for forgiveness to Lord Vishnu. As a consequence of the Lord’s acceptance of his prayers, Hem was cleansed of all his sins. He was no longer afflicted and was reunited with his loving wife.

Similarly, on Yogini Ekadashi, all devotees who observe this fast and pray to Lord Vishnu with pure thoughts and feelings will be liberated from all problems and health-related concerns.

On this day, you may offer prayers to the Lord of the Lotus Feet by reciting Vishnu Mantras or Vishnu Sahasranamam. Fasting on Yogini Ekadashi is said to be equivalent to feeding 88 Brahmins.

The best day to get rid of worrying health problems is Yogini Ekadashi. Learn the proper Puja rituals method from our experts to obtain Lord Vishnu’s divine blessings.

Yogini Ekadashi devotees or observers are expected to rise early and take a holy bath before beginning the ceremony’s rituals.

When conducting all of the rituals, it is important to have complete commitment and devotion. Yogini Ekadashi Vrat must be observed by devotees.

Devotees must worship and pray to the goddess, as well as bring incense sticks, candles, and tulsi leaves. To complete the fast, you must recite the tale of Yogini Ekadashi. The deity’s aarti must be done, and then holy food (prasad) must be distributed to everyone.

All Yogini Ekadashi Fast rituals begin on the eve of Dashami (tenth day).

On this particular day, observers are expected to eat a single Satvik meal before the sunset date. The Vrat will last until the end of the Ekadashi tithi.

Nighttime sleep is not permitted for the observers. To appease Lord Vishnu, they must spend their whole day reciting Mantras.

The recitation of the ‘Vishnu Sahasranama’ is considered extremely auspicious. Devotees worship Lord Vishnu with great reverence on this day.

On the eve of Yogini Ekadashi, doing charity is thought to be extremely rewarding. The observer should help the Brahmins by donating food, clothing, and funds.

Why Do We Fast on Yogini Ekadashi?

Yogini Ekadashi fasting begins on the night of Dashami (the tenth day) of the lunar month’s dark half. Here are some of the advantages of fasting on this day.

This fasting cycle is very beneficial for getting rid of different illnesses and diseases.It aids devotees in attaining salvation from sins and evil deeds.Fasting during this time frame heightens moral consciousness.

It strengthens trust and loyalty to Lord Vishnu, who fulfils all wishes and provides his devotees with a luxurious life. You can also perform an online Vishnu Puja for that.

On this day, penance leads to the forgiveness of sins and the clearing of the road to Moksha. Contact the Best Astrologers via phone or email. Share all of your personal and professional grievances, and they will be resolved as soon as possible.