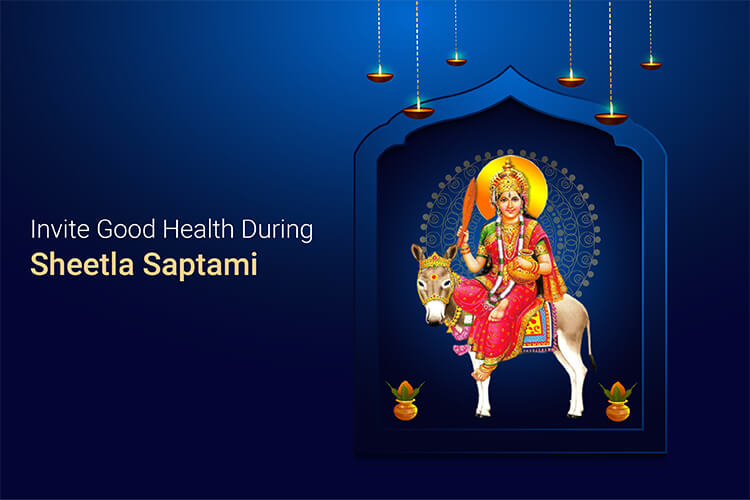 India is a land where each and every God or Goddess holds immense importance. While festivals have their own place in this rich heritage, we are here with another glorious celebration of Sheetala Saptami. Yaas! This festival is celebrated in honour of Sheetala Mata who is known to banish diseases like measles, smallpox, and chickenpox. In her pictures, she is seen carrying a ‘Kalash’ (vessel) and a ‘broom’ in her hands. Ancient tales say that approximately 33 Crore Devas and Devis live in her Kalash.

Sheetala Satam is observed seven days after the festival of colours, Holi. This year, it will be celebrated as per the below dates and tithi.

The famous ‘Skanda Purana’ mentions the importance of this day. As per Hindu scripts, Sheetala Maa is said to have incarnated from the Divine Feminines Parvati Devi and Durga Mata. Goddess Shitala is well-known for both; i.e. imposing chicken pox or small pox on people as well as healing them. Hence, she is worshipped by the Hindu devotees on this day to seek protection for their children. ‘Sheetala’ word in literal sense means ‘cool’, which indicates curing these diseases through her coolness.

Your 2021 Report has all the answers and guidance for the year ahead. Make the most of this opportunity and know your personalised predictions done by experts.

The most significant ritual of this festival is avoiding cooking fresh food, and simply consuming the meal prepared on the previous day. Basoda means stale food, hence this day is also called as Sheetala Saptami Basoda. Eating non-spicy, plain and cold food stored safely from one day prior is believed to ease the digestive system as per the ancient Shastras (scripts). Therefore, conducting Sheetala Saptami Vrat brings a calming effect for the stomach.

One more thing to keep in mind is bathing in lukewarm water. One should avoid taking a hot-water bath particularly on Sheetla Satam as to invigorate the overall body. Although everyone would not believe these rituals, the hygiene and health philosophies that come up with this occasion are deemed to be positive.

The celebrations of this fest are of prime importance in the northern states of India like Uttar Pradesh, Gujarat, and Rajasthan. However, it is also celebrated across the country normally. Moreover, the people of Gujarat celebrate Shitla Satam on the seventh day of the Krishna Paksha that is one day prior to Janmashtami. This period is also said to be dedicated to the Goddess Shitala and similar custom of eating the food cooked on the previous day is followed. In the Southern states, Sheetala Mata is regarded as Goddess Mariamman or Devi Poleramma.

Are you suffering from an incurable and prolonged disease? Book the online Rudrabhishekam Puja that you can attend from anywhere virtually and recover your health with divine grace.

The Symbolism Behind Sheetala Mata’s Attire

As seen in the pictures, Shitla Devi carries a broom in her hand and wears a garland of Neem leaves. This represents the significance of cleanliness and maintaining tidy surroundings. People know the medicinal characteristic of Neem that is a natural product. In the ancient times, when there were no antibiotics discovered, it was believed to detox the body by eradicating germs and infections. She also holds a Kalash (a vessel of water). This indicates the importance of clean water for green health.

In a nutshell, Sheetala Saptami is a day to celebrate good health and receive boons of a better life ahead. Happy Sheetala Satam!

Attract Good Luck With Your Personalised Horoscope On The Auspicious Day Of Sheetala Saptami! - Get Your Free Consultation!
With Ganesha's Grace,
The GaneshaSpeaks.com Team