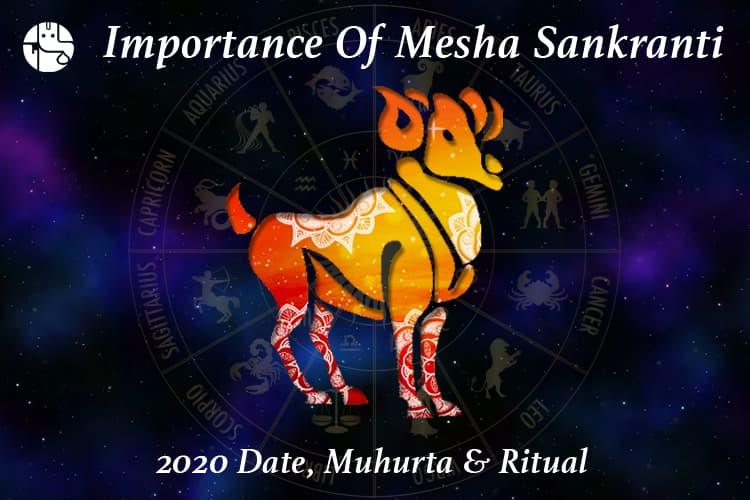 Introduction: Mesha Sankranti marks the beginning of the New Year in the traditional Solar calendar. On this day, the Sun enters the sidereal Aries or Mesha rashi and so it is called Mesha Sankranti. Regional New Year festivals also take place on this day like Vaisakhi in Punjab, Pana Sankranti in Odisha and, on the next day, it is celebrated asPohela Boishakh in West Bengal, Vishu in Kerala and Puthandu in Tamilnadu respectively.

Mesha Sankranti Date,Timings & Muhurta 2023: In 2023 Mesha Sankranti will be occurring on Friday, the 14th of April, in the Purva Ashadha nakshatra. Below is a table with the exact timings of the commencement and closing of the Mesha Sankranti festival along with the Punya and Maha Punya kaal Muhurta.

2023 Mesha Sankranti Phalam Benefits
Mesha Sankranti festival is considered to be an auspicious period where people perform Puja rituals to gain special blessings from deities like Lord Shiva and Goddess Kali. Below are a few noteworthy points:

Make your life stable by getting complete analysis of your past, present and future. Order our Online Janam Patri/Kundli and foresee what you can achieve with your potential.

The given rituals are followed during Mesha Sankranti:

After performing rituals as per the given Muhurta, it’s time for people to celebrate the festival of Mesha Sankranti or Maha Vishuva Sankranti. It is celebrated as per various solar regional calendars in India.