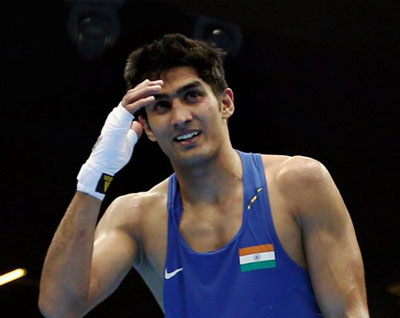 The 2008 Olympic bronze medalist, Vijender Singh added another feather to his cap recently when he defeated Kerry Hope in a sensational victory to clinch the WBO Asia Pacific Super Middleweight title. The boxer from Haryana was raised in the village of Bhiwani, where he took his first boxing classes in the Bhiwani Boxing Club. The club's coach Jagdish Singh was quick to spot Vijender's talent and encouraged him to take the sport seriously. Later he was coached by none other than the National coach Gurbaksh Singh Sandhu. Going from strength to strength, Vijender won medal after medal in national championships, and was selected for the  2004 Athens Summer Olympics and the 2006 Commonwealth Games. In the Asian Games held at Doha in 2006 he won a bronze medal. However, his crowing glory came when he defeated Carlos Gongora of Ecuador in the quarterfinals of the 2008 Beijing Summer Olympics to win the first ever Olympic medal (bronze) for an Indian boxer. He turned professional in 2015, and thus is not eligible to participate in the upcoming Rio Olympics.
In this article, Ganesha analyses what lies in store for him in the upcoming months.
Vijender Singh
29th October, 1985
Bhiwani, Haryana, India
SOLAR CHART

The Planetary Picture of the Man With the Iron Fists:
Ganesha notes that Vijender is born with the Sun placed in the Libra Sign and the Moon in the Aries Sign. The planet of speed, agility, strength and courage – Mars is in exchange with Mercury.
The combination of the Moon with Rahu gives Vijender great aggression, determination and the raw instincts. The power of Mars in his Chart gets amplified, as it is placed in conjunction with Venus and Jupiter is casting its benevolent grace on it. Also, due to the exchange with Mercury, his skills and abilities get a razor sharp edge.
The Upcoming Months and Vijender's Fortunes:
Ganesha says that the this magical run is just the beginning of the many bright achievements that would be coming Vijender's way in the upcoming months.
Ganesha notes that the period post 11th August, 2016, will be an extremely bright phase and there would be many more feats that he may achieve in the upcoming year. Post the above mentioned period, Jupiter will be transiting over the Natal Mars and Venus and will be aspecting the Natal Jupiter. During this phase, the fiery boxer may go through an even more positive tranformation and this will benefit him in the long run. He will be able to channelise his firepower, strengths and skills in a more refined manner and he will be able to improvise well. He will be able to clinch some of the important championship titles in the upcoming year and his renown may swell further.
But, Ganesha feels that in the period till 18th September, 2016, Vijender may be may make some statements which may ruffle a few feathers. Also due to the influence of Mars on the Natal Mercury, he may be a in a highly combative and responsive mode. Thus, he is advised to be a bit more careful in his media interactions.
With Ganesha's Grace,
Aaditya Sain
The GaneshaSpeaks.com Team
Share