Rishab Pant – Will He Literally Make It Big At The National Level? 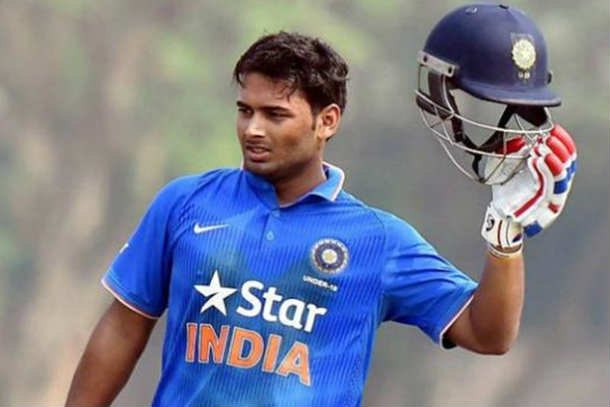 Rishab Pant is one stunning talent, who has been impressing all with his brilliant show on the field. In this article, we prod Ganesha to analyse his Horoscope and predict what the cosmos indicates about his future prospects. In response to that Ganesha says that he has all that is required to rise high and shine bright. He has a strong Chart, and a powerful Mars and an exalted Mercury are the highlights, which will help him to excel in his chosen field. Read on and find out, when he will be able to dazzle on the national scene.
Rishabh Pant
Date of Birth: 4th October, 1997
Time of Birth: Unavailable
Place of Birth: Haridwar, Uttar Pradesh, India
Solar Chart

Get Your Hand-written Janampatri By Our Experts.
The 'M' Factor:
Ganesha notes that in the Chart of the young Rishab Pant, Mars – the principle  Karaka of sports, action and energy, is placed in its own Sign – Scorpio, along with Venus. A formidably placed Mars always works in the favour of a sport-person and renders the fire power. This factor makes him action-oriented,  aggressive, determined and gives the strength to face challenges. It also denotes the capacity to conquer the rivals. This feature of the Chart denotes the picture of a young 'warrior', who is ready to take on the world.
Exchange of Houses between Jupiter-Saturn:
There is an exchange of Houses between Jupiter and Saturn. This strong aspect  makes him resourceful, methodical and persistent. In fact, it blesssed him the great pragmatism and a strong drive to achieve success and greater recognition. Because of his aggression combined with organizing abilities he is able to work on several aspects of his game simultaneously. This aspect also indicates great perseverence and wisdom, and thus, he will be able to learn quickly from his experiences.
Also Read: Virat Will Continue To Strike The Balls With Surgical Precision Even In Upcoming Year
Exalted Mercury and Quick Silver Reflexes:
An exalted Mercury indicates quick reflexes, great mental as well as physical agility, sharp focus on every aspect of his game and a meticulous approach. This placement of Mercury combined with the well-placed Mars indicates tremendous potential and Rishab is most likely to shine bright, feels Ganesha.
The next bright star?
Such a strong chart indicates that he is supremely talented and is likely to take everyone by surprise with his performance. It shouldn't be too surprising to see him shine even at the national level, as he surely has it within him to reach great heights and achieve amazing feats.
The current scenario and important planetary influences:
The transiting Jupiter is currently moving over the natal Sun and Mercury and is  aspecting the natal Jupiter as well as Natal Saturn. So, the year 2017 will be the most promising year for his career. The next year will be wonderful for Rishab according to Ganesha, but what about you? Find out what's in store for you in our exclusive 2017 Yearly Report. However, due to tough transit of Saturn, he may face some resistance and may not be able to get desired success or he may lack the consistency in his performances. But he will be able to battle it out and may rise as a future Star of Indian cricket after September 2017. He will earn great success at the national level. His performance will improve significantly and there are bright chances that he would find his place in International Cricket.
Thus, Ganesha feels that he would be the one to watch out for in the months to come.
With Ganesha's Grace,
Tanmay K. Thakar
The GaneshaSpeaks.com Team
Have some queries in your mind regarding certain areas of life? Then, why continue to remain in doubt. Talk To Astrologer now for expert guidance and smart solutions!
Share