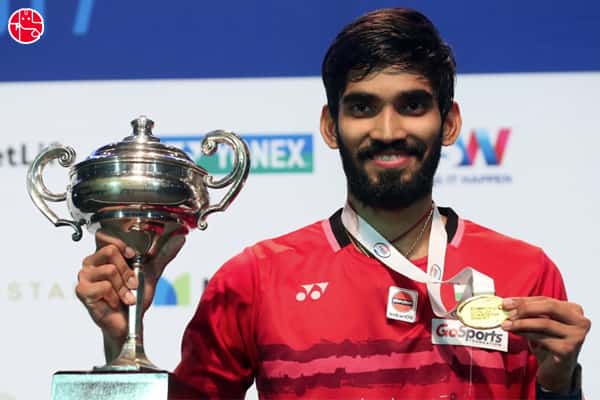 (Image Source: Internet)
After Kidambi Srikanth's back-to-back wins in the World Badminton Super Series, he has stormed into the world top 10, entering the elite group at Number 8. Now, the 24-year-old Guntur lad, yet another star produced by Gopichand, himself a former world champion, Srikanth is already being talked of of being in the same league. Kidambi Srikanth is continuously gaining glory. But what do you think about your success? Do you have any query? Get your answer with Ask Any Question Report.
It has been a truly memorable performance to beat someone like Chen Long (current Olympic champion) and glad that Srikanth showed he had the game to beat anyone on his day.
--Pullela Gopichand
First Kidambi Srikanth defeated the world and reigning Olympic champion Chen Long in straight games 22-20, 21-6 to claim the Australian Open Super Series, and followed it up with his 21-11, 21-19 triumph over Japan's Kazumasa Sakai in the Indonesia Open final recently. Kidambi's success will also mean more endorsements for him. This will boost his financial situation. Do you want to know and improve your financial situation? You can do it with Free 2017 Finance Report.
I think Kidambi Srikanth is in great form. It is very creditable. He has reached three Super Series finals and won two, it is one of his best periods.
--Prakash Padukone
This achievement has made Kidambi Srikanth the first Indian badminton player to win consecutive Super Series titles.
Congratulations Kidambi Srikanth! You have beaten the best. Given India a pride of place. Proud of you.
--Amitabh Bachchan
Riding on the crest of his self-confidence, Kidambi Srikanth has vowed that there is much more to come. And, sure enough, looking into his Horoscope, Ganesha predicts the same thing -- that Kidambi Srikanth's purple patch will continue in the near future.
There is much more to come. -- Kidambi Srikanth
Kidambi Srikanth
Date of Birth: 7th February 1993
Birth Time: Not Available
Place of Birth: Ravulapalem, Andhra Pradesh, India
Surya Kundali 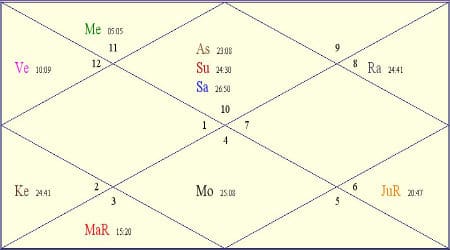 Planets Will Help Him Achieve Name, Fame And Glory

Kidambi Srikanth also has exalted Venus, and Jupiter is aspecting it which makes him able to achieve great results, fame and glory. Mercury is in the star of Mars indicates his attacking mindset and well-thought-out game plan to conquer the rivals. This is a fitting picture of someone who is successful in his field at the highest level.

Currently, the transiting Jupiter is moving over the natal Jupiter and aspecting Saturn, Sun and Jupiter. Due to such a benefic transit of Jupiter, Kidambi Srikanth has so far achieved splendid results in major tournaments. He will continue to perform well in later part of year 2017 as well. The transiting Jupiter will help his career significantly from September 2017. However, the forthcoming transit of Rahu in Cancer will remain difficult for him. So, Kidambi Srikanth may face some resistance and may not be able to get the success that he desires and deserves after 15th August 2018.

His International Ranking Will Improve Remarkably

But the transiting Jupiter will help him battle it out and will make Kidambi Srikanth able to make his mark at the international level between October 2017 and September 2018. His Ranking will improve significantly.  However, he will require to take extra care of his health and fitness during the later half year 2017 and again between April 2018 and August 2018.
With Ganesha's Grace,
Tanmay K.Thakar
The GaneshaSpeaks.com Team
For Instant Solutions! Talk To Astrologer Now.
Share