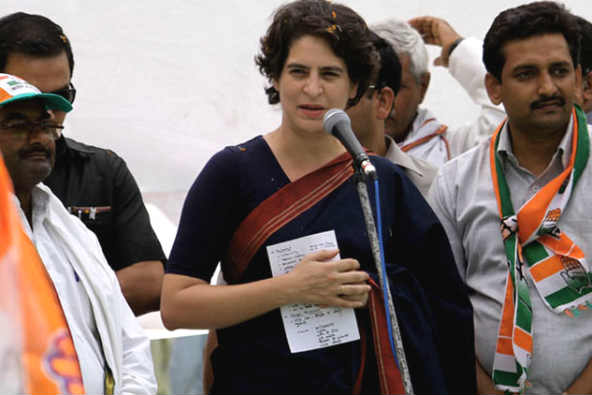 Get Your Hand-written Janampatri By Our Experts.
What do her planets have to say?
In Priyanka's Horoscope, the Lord of 10th house Jupiter is placed in the 7th house with the Ascendant Lord and forming a strong Hamsa Yoga which indicates that she is dynamic and spontaneous. She has the abilities to make huge impact on voters.
The fundamentals:
Priyanka is born with Gemini Ascendant. Jupiter, which happens to be the Lord of the 10th House and 7th House is placed in the 7th House, that too in conjunction with the Lord of the Ascendant. As Jupiter is placed in its own Sign and that too in a Kendra position, it forms the auspicious Hamsa Yoga – one of the Panch Mahapurusha Raja Yogas. These factors indicate that she is a highly spontaneous and dynamic individual who can take excellent decisions.
Get an idea of your financial trends in the year 2017 with the help of the 2017 Finance Report.
The Sun rendering strong support:
The Sun, which happens to be the planet which represents politics, happens to be the Aatmakaraka planet in her Chart and renders more power to Jupiter and Mercury in the 7th House. With  All these factors show a very bright picture and indicate that she has the skill to achieve big things. Moreover, she will be able to strongly influence the voters as she has a highly strong 7th House.
The highly fortunate Priyanka:
Venus – the Lord of the 5th House is placed in the 9th House and the Lord of the 9th House – Saturn is aspecting it. This points out the fact that she has tremendous support of fortune and this will help her in crucial situations. A well-disposed Venus also indicates a charismatic personality, who can convince others about her views very well.
Will your fortune support you in matters of career in the year 2017? Get the answers in the 2017 Career Report.
The current scenario and the planetary indications:
She is passing through the Venus Mahadasha and Saturn Antardasha. This is a favourable Dasha sequence and will help her to create a positive impact on the mindset of the voters in the electoral battleground of Uttar Pradesh. The stars indicate that there will be a prominent role of hers in the UP election campaign directly or indirectly.
Congress' Trump Card:
Her ability to strike a chord with the masses will help her party and the alliance with the Samajwadi Party during the upcoming assembly elections in UP. The powerful 7th House effect in her Chart will help propel her towards an important position and will help her party get better mileage.
The worrisome aspect:
It is to be noted that she is also passing through the 'Sade-Sati' and transiting Saturn will be influencing the natal Sun during the election in UP. It indicates that she will be facing problems in implementing her plans and policies. The results of her efforts will not meet the expectations. Some unexpected problems or hurdles are foreseen, which may upset the momentum.
Nevertheless, her presence will boost the chances of Congress in UP in this elections, feels Ganesha.
With Ganesha's Grace,
Tanmay K. Thakar
The GaneshaSpeaks.com Team