Ganesha Sees No Respite For Karti Chidambaram Till October 2018 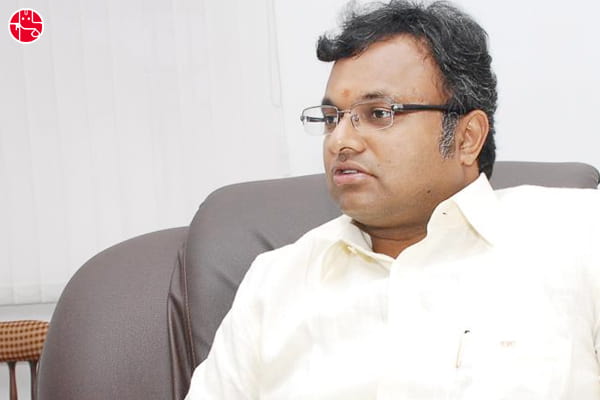 (Image Source: Internet)
Karti Chidambaram, son of former Indian Finance Minister, Home Minister and Rajya Sabha member P Chidambaram, is a politician and businessman. In 2015-16, media revelations uncovered his hidden ownership of a wide-spread international network of companies. Karti Chidambaram's past has been good but present is troubled as he is under legal scanner. Ganesha probes his horoscope and predicts about his future.
Karti Chidambaram
Date of Birth: 16th November 1971
Birth Time: Unknown
Place of Birth: Chennai, Tamil Nadu, India
Surya Kundli

Karti Chidambaram Uses Brains In Professional And Personal Life Both

Karti Chidambaram has Mercury-Jupiter and Venus in conjunction in Scorpio which indicates that he is strongly intellectual and is expert in utilizing his brains efficiently not only in business but also in his personal life. Besides this, Karti Chidambaram is bestowed with a strong sense to reach the depths beneath to see what kind of people are lurking inside. Also, he has abilities to develop strong strategies to reach his goal in accordance with the traits of his Zodiac Signs Scorpio. Karti Chidambaram has used his abilities to rise up in career. Do you want a boost in your career? You can get it if you buy the Career Ask A Question Report. You can get your pressing problem answered and move ahead in life.

Karti Chidambaram Has A Keen Ability To Identify Opportunities

Though he has very strong emotions, Karti Chidambaram would not express his resentment aloud even if he is possessing a volcano inside. He also has the tendency of being self-centred, and a very sharp sense to identify opportunities and take maximum advantage according to his birth chart. The strong Rajayoga indicates a strong personality with dignified outward appearance and abilities to climb the ladders of success rapidly. Opportunities should be used to learn and earn. Are you curious about your future financial situation? You can put to rest your concerns. Get the Free 2017 Finance Report.

Venus-Mercury and Jupiter in the star of Mercury provide him with a strong intellect, analyzing skills, intuition and dignified attitude which could make Karti Chidambaram emerge upon the high mounts, while the placement of Rahu and Ketu could guide him towards the wrong path leading him towards struggles, tensions, blames and legal problems.

The period of Saturn's transit through Scorpio could enclose him with increasing enemies who would try to tarnish Karti Chidambaram's image while he would become more aggressive and irksome in this phase. Distances and conflicts in personal and professional relations could be another adverse impact of Saturn, is seen from Karti Chidambaram's Horoscope. Saturn could also bring severe legal issues and confrontation with authority people.

The Cosmos Will Conspire To Cause Severe Stress To Him

Stars Will Offer No Respite For Him Till October 2018

However, the transiting Jupiter in Libra would also bestow strength to Karti Chidambaram and would help him to keep the positive approach alive which would make him able to walk through this difficult period. He may be able to get some legal remedies along with a better fortune due to the favourable transit of Jupiter after mid-November 2017. But, Karti Chidambaram can not expect total relief till October 2018 as one or the other issues and problems will keep him on his toes. Difficulties and impediments may keep bothering him but some positive air would surely hover around him to keep him safe as Karti Chidambaram's horoscope. The period post-October 2018 will lead him towards the positive direction and growth though it would be a quiet difficult path.
With Ganesha's Grace,
Tanmay K.Thakar
The GaneshaSpeaks.com Team
For Instant Solutions! Talk To Astrologer Now.
Share