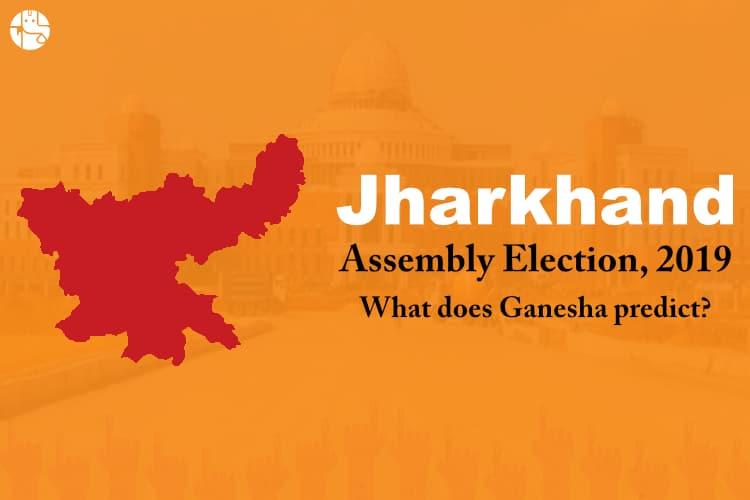 As you all know, the Jharkhand Assembly elections have already started from November 30, 2019. They are scheduled till December 20, 2019, and the results are to be declared on December 23, 2019. These elections comprise of prime candidates in the parties of ruling and opposition. A total of 81 members are to be elected for Legislative Assembly.

With Raghubar Das as one of the key candidates, we have Babulal Marandi geared up on the other side. Whereas, Hemant Soren and Arjun Munda are also giving tough competition in the Jharkhand Assembly elections 2019.

Let’s uncover what Ganesha predicts about the fate of the current Jharkhand elections as per the BJP foundation chart.

The ruling party BJP is under the influence of Moon’s major period and Rahu’s sub-period. In addition, there is an influence of the last phase of Sade Sati. This indicates that the ruling party might face some tough challenges to retain their power.

The transiting Jupiter is moving in its own sign with Saturn and Ketu. Jupiter is the Lord of the tenth house. An afflicted Jupiter also indicates that the ruling party would be struggling to maintain its lead.

As per Jharkhand state foundation horoscope, the eighth house Lord Jupiter will be moving over the tenth house Lord Venus on the result date. This shows a bit of difficulty on the side of the ruling party.

Also read: What does Arjun Munda’s Horoscope say about the Jharkhand Elections 2019?

In the foundation chart, Moon is severely afflicted. Hence, the mood of the voters will be unpredictable and is likely to cause some issues for the ruling party. The ascendant Lord Sun will be moving with Saturn and Ketu on the result date which is again an unfavorable factor for the current government.

However, Jupiter is also the Lord of the fifth house in this chart and it will aspect the Moon and ascendant both on the result date. It might bring benefits to the ruling party.

Additionally, the ascendant and its Lord Sun in the foundation chart will be free from afflictions. This factor might also increase winning prospects for the ruling party.

Also read: Know what the Jharkhand Elections 2019 have in store for Babulal Marandi

On the day of results, the transiting Moon will be passing through the third house over the ascendant Lord Sun in foundation chart. This is another positive factor for the ruling party.

The ruling party BJP might suffer some setbacks. It indicates a very close and neck to neck competition in many constituencies. The margin of winning will remain narrow. Jharkhand state foundation chart indicates that the state is undergoing a transition phase. It also indicates disturbed psychology of the voters which may cause “surprise” results in some constituencies.
Considering all the parameters, it seems that the ruling party will face stiff challenges and it will be very difficult for the BJP to maintain its lead.

Stars Have Got Something for Hemant Soren in the Battle! Read about it here.

To Get Your Personalized Solutions, Talk To An Astrologer Now!
With Ganesha's Grace,
The GaneshaSpeaks Team