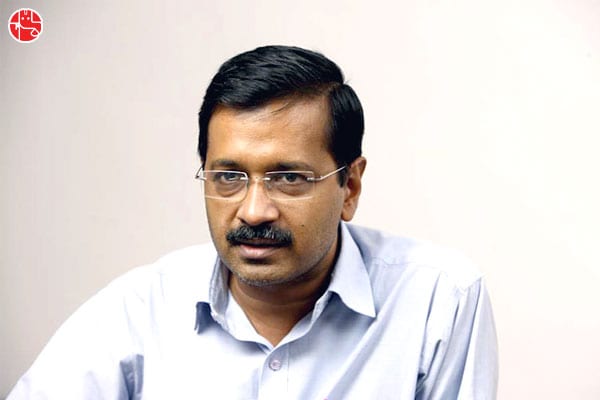 The higher they rise, the harder they fall. The first time Arvind Kejriwal became the chief minister of Delhi in December 2013, he quit after 49 days in office, inviting the now infamous epithet Bhagoda. But the blood was still running hot in the veins of the Aam Aadmi Party's boss, and he fought back to sweep the 2015 Delhi Assembly elections, winning 67 of the 70 seats -- such was the absolute faith of the people of Delhi who voted Arvind Kejriwal to power on the anti-corruption plank. Scarcely two years later the same people of Delhi dumped Arvind Kejriwal into oblivion in the Muncipal Corporation elections, sick and tired of his shenanigans, roguish leadership, and an ego which seemed to bloat in direct proportion to the meteoric rise of the AAP, so much so that he actually began to harbor ambitions (illusions) of becoming the Prime Minister of India.
But the worst was yet to come, when Arvind Kejriwal's own party-men began to desert him, leveling allegations of corruption against the man who rose to power on the promise to clean up the country of the menace of the all-pervading corruption. The latest allegation comes from the AAP MLA Kapil Sharma who is accusing Arvind Kejriwal of taking a Rs 2 crore bribe from Delhi health minister Satyendra Jain. The AAP lost all the polls in which it contested in the recent assembly elections, and now the downfall of the biggest upstart that Indian politics has probably ever seen looks to be almost complete. Ganesha peeps into Arvind Kejriwal's horoscope and feels that, going forward, it will be nearly impossible for him to salvage his image as a clean politician. Kejriwal's career may be seeing a sharp downside. But how will your career be? Buy the 2020 Career Report and find out.
Arvind Kejriwal
Date of Birth: 16th August, 1968
Time of Birth: 07:30 am (unconfirmed)
Place of Birth: Siwani, Bhiwani district, Haryana, India
Surya Kundali 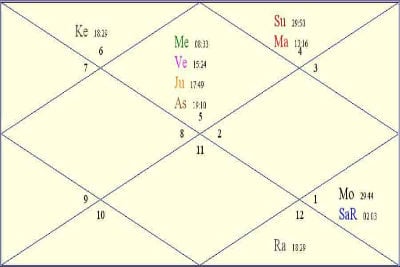 Also, he has five planets in the trine houses in his horoscope. Sun is the Atmakaraka in his chart. So, he possesses impressive leadership qualities and mass appeal. It promises a wonderful career, as long as he can focus his attention on Delhi, stay down to earth, and not get embroiled in corruption.

However, Sun is the Ascendant Lord and placed in the 12th house with debilitated Mars. It makes Arvind Kejriwal 'over-confident' , dominant and often known for his confrontational attitude. Adding to this, Saturn, debilitated sixth house lord in the ninth house of luck with the Lord of 12th house Moon is a very strong negative signature in his chart. It indicates lots of struggle and difficulties in Arvind Kejriwal's political career. It also makes him prone to a sudden downfall, as witnessed recently after AAP lost in the assembly elections and even in the Delhi Municipal Corporation polls.

Rahu To Cast A Dark Shadow Over His Public Image

Arvind Kejriwal is currently under the influence of Jupiter Mahadasha and Venus Bhukti. Though the Jupiter-Venus conjunction in the Ascendant is conducive to progress, the current transit of Rahu over this conjunction indicates  dramatic collapse of Arvind Kejriwal's public image. Rahu is placed in the 8th house and its significator Jupiter is eclipsed by transiting Rahu, which may cause struggle and tensions. Many misunderstandings, problems and doubts will dent Arvind Kejriwal's public image. Adding to this, the forthcoming transit of Rahu in Cancer will also remain difficult for Arvind Kejriwal. The infighting in his party and his party-men turning against him publically are a case in point. His party-men have, in fact, cast aspersions on Arvind Kejriwal integrity by alleging corrupt deals on his part. Kejriwal is seeing tough times. What do the planets indicate about your future in 2017? Avail the 2020 Yearly Report to get answers.

Rahu in Cancer will be moving over the natal Sun and Mars which also indicates legal issues and implications of such issues may cause severe damage to Arvind Kejriwal's political career. The transiting Jupiter in Libra may help him to an extent but it will be very difficult and nearly impossible to regain his image, credibility and authority in Indian Politics. Arvind Kejriwal is likely to suffer emotional setbacks and explosive situations within his own Party. Arvind Kejriwal and his cohorts are facing multiple investigations from all directions, such as Delhi Police, CBI, Income Tax, Punjab Police and the Election Commission. The Delhi government’s own anti-corruption branch is investigating corruption charges against him. In such a scenario, it looks improbable that Arvind Kejriwal can salvage his image as a squeaky clean politician, much less one who is out to clean up the mess in the country.
With Ganesha's Grace,
Acharya Bharadwaja
The GaneshaSpeaks.com Team
Have some queries in your mind regarding certain areas of life? Then, why continue to remain in doubt. Talk To Astrologer now for expert guidance and smart solutions!
You Would Also Like To Read:
1) Lokesh Naidu 2017 Predictions: Not Likely To Be A Good Bet For 2019 Assembly Elections
2) Rahul Gandhi Horoscope Predictions: A Bleak Future And Diminishing Fortunes Foreseen
3) Yogi Adityanath Will Have To Do A Lot Of ‘Tapasya’ To Usher In The Development Era In UP
4) Punjab Elections Predictions: AAP Will Prove To Be The Deciding Factor
5) UP Election 2017: Priyanka Gandhi May Fail To Impress As Congress’ Trump Card
Share