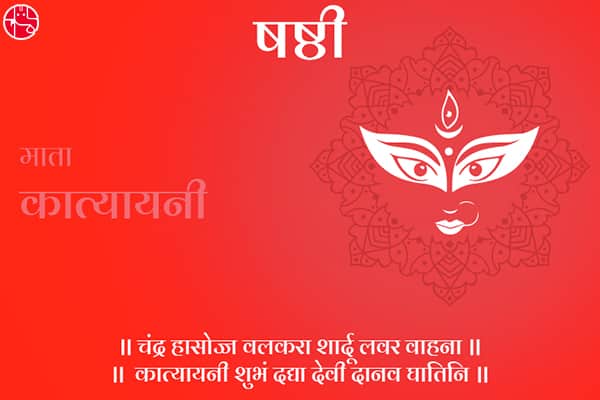 The Reason Behind Her Name

The sixth avatar amongst the forms of Maa Shakti is Goddess Katyayani. She will be worshiped on September 26, 2017, i.e. the sixth day of Navratri. As per the traditional story, once upon a time, there was a sage named Kata. He had a son whose name was Katya. In his family, Katyayana became a sage and gained worldwide popularity. He practiced penance for many years to appease Maa Shakti. At the time of boon, sage Katyayana requested Mother Goddess Durgas to take birth as his daughter. The goddess was very pleased and accepted his request. Later on,  when the cruel acts of the demon Mahishasura crossed every limit, the trinity of Gods i.e. Brahma, Vishnu and Shiva became very angry.  And hence,  they created a goddess by distributing some part of their great power, in order to destroy the demon. As sage Katyayana was the first person to worship this goddess, she was named Maa Katyayani.

Then she accepted the worship of Katyayana for three days and killed the demon Mahisasura. Maa Katyayani is the established presiding deity of Vraj  Bhoomi region. Her form is highly divine and dazzling. She has a golden, bright and beaming complexion. Goddess Katyayani has four arms. Her upper right hand is in the pose of banishing all fears, and the lower arm is in the pose of granting a boon. She holds a sword in her upper left hand, and a lotus flower adorns her lower left hand. Maa Katyayani rides a lion. Goddess Durga is full of love and power. We can get some of her blessings. Tradition has bestowed us with such methods. If you buy and worship the Shree Yantra Golden Plated, you will see the change.

Katyayani Goddess Showers Her Devotees With Boons And Blessings

Further, on the 6th day of the Navratri festival, the mind of the devotee should remain focused on the Ajna Chakra or the Agnya Chakra. If the worshipper completely surrenders himself or herself to mother Katyayani, he or she is showered with boons by Goddess Katyayani. Also, all the four objects I.e. Dharma, Artha, Kama and Moksha can be easily attained by the devotee or the Sadhaka, if he/she worships Maa Katyayani with full faith and devotion. Planets are the agents of God. We can please the planets with the help of Astrology and get lots of happiness in life.Money is an important ingredient for happiness as it satisfies our needs. If you want to boost your finances during this Jupiter transit, buy the Jupiter Transit Report For Finance.

The Mantra And Other Facts About Maa Katyayani