Narasimha Jayanti: The Day When Lord Vishnu Re-Incarnated As Narasimha 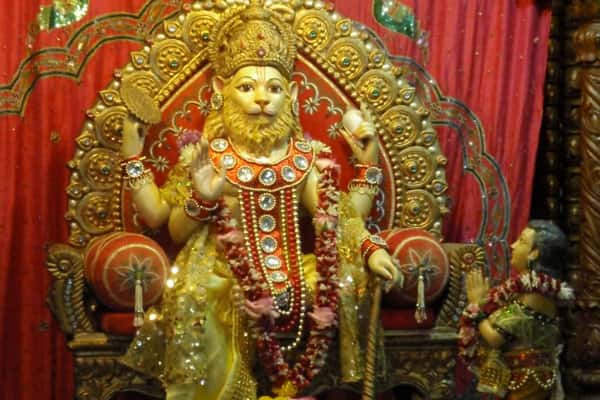 Since time immemorial, human being has sought divine intervention to curb evil and conquer calamities. Indian tradition is full of such occasions where pious men have received help from supernatural agencies in destroying their dangers. One festival which celebrates such an occasion is Narasimha Jayanti. The holy festival of Narasimha Jayanti falls on the fourth lunar day of Shukla Paksha in the month of Vaishakha. As per the English calendar, this year Narasimha Jayanti falls on May 4, 2023, which is a Thursday. This auspicious day can be the best time to know about your future? Buy Ask Any Question Report and get the answers.

Narasimha Jayanti is highly auspicious to the Hindus as it is believed that on this day Lord Vishnu had re-incarnated himself as Narasimha (half man and half lion or the Lion Man Avatar) to protect his devotee Prahlad and kill the demon king Hiranyakashipu. That is why this day is celebrated as the Narasimha Jayanti. Now, let’s see the story, fast and rituals associated with Narasimha Jayanti.

Narasimha Jayanti And Hiranyakashipu: He Takes A Resolve To Avenge His Brother’s Killing

In order to protect righteousness and conquer the evil, Lord Vishnu has re-incarnated to Earth several times. One such re-incarnation is the Narasimha Avatar. As per the tradition, there lived a Rishi (seer) in ancient India called Kashyap. Kashyap and his wife Diti had two sons, Hiranyaksh and Hiranyakashipu.

The evil Hiranyaksh was killed by an earlier reincarnation of Vishnu, the Varaha (Boar) Avatar. This had infuriated his brother Hiranyakashipu. He had vowed to avenge the killing of Hiranyaksh. So, in his resolve to defeat Lord Vishnu, Hiranyakashipu performed intense Tapasya (austere penance) and by pleasing Lord Brahma procured the boon of turning unconquerable.

Hiranyakashipu began to misuse his newly acquired power. He acquired control over the heaven using his foul means and began to harass the Devtas (demigods), Rishis (seers) and Munis (ascetics). Around that time Hiranyakashipu’s wife Kayadhu became pregnant and soon she gave birth to a baby boy who was named Prahlad.

Narasimha Jayanti And Prahlad: He Had Unfailing Faith In Lord Vishnu

In spite of being born in the family of demons, Prahlad showed noble virtues. He soon turned to be a strong devotee of Lord Vishnu and recited the Lord’s name anytime and in any situation. This added much discomfort to Hiranyakashipu, who was dead against any kind of devotion to Lord Vishnu. In spite of his father’s reprimand, Prahlad continued to worship Lord Vishnu. This enraged Hiranyakashipu who ultimately decided to kill his own son.

Narasimha Jayanti And The Appearance of Lord Narasimha

Just then, to Hiranyakashipu’s utter surprise, Lord Narasimha, the fourth Avatar of Vishnu, emerged out of the pillar. He was in the form of half man and half lion. He took Hiranyakashipu in his lap and killed him by tearing his chest with his sharp nails. Thereafter, Lord Narasimha blessed Prahlad. It is said that anyone who will fast on this day will get all the joys and be freed of all the sins. This is a wonderful story from devotee Prahlad’s life. Do you want to know about your life in 2023? Get the 2023 Detailed Yearly Report and know everything about your future.

The Procedure And Rituals To Be Performed On Narasimha Jayanti

On this day, one should wake before the sunrise. After bathing, etc he/she should begin the worship of Lord Narasimha. He/she should chant the necessary mantras and offer sandalwood powder (Chandan), saffron (Kesar), coconut (Nariyal), fruits, flowers and so on. After that, the devotee should seat himself/herself in the puja room and recite Narasimha Gayatri Mantra. Those devotees who keep fast should give charity in the form of til, gold as per their affordability. One who keeps fast on Narasimha Jayanti and prays to him with a true mind, his/her all wishes are fulfilled.