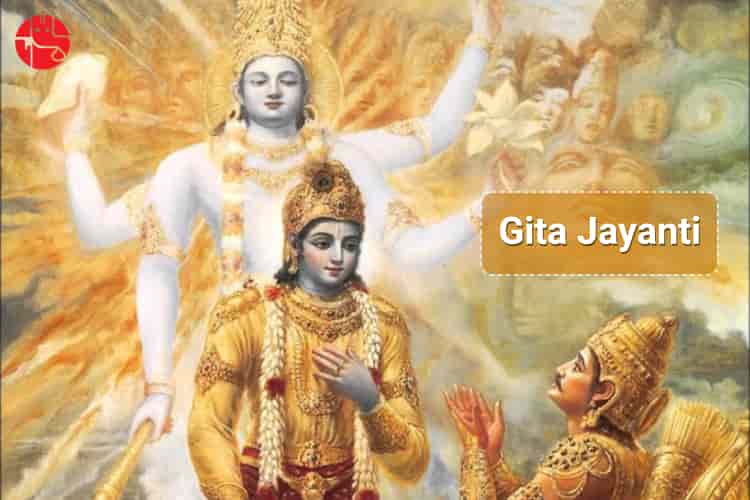 The Indian religion Hinduism is enriched with voluminous literature, containing sacred ancient wisdom which has come down from ages. Out of the plethora of scriptures found in the ancient Indian tradition, Vedas come out as the most fundamental ones, regarded by many Hindus to be the most sacred and the words of God. Indeed they are the foundation of Hindu philosophy and religious beliefs.

However, it is said that the Vedas are vast and not very direct in the import of their message. Several scholars believe that Bhagavad Gita is the crux of Vedic wisdom and the summary of Indian Spiritual Knowledge. In fact, Bhagavad Gita contains an ocean of wisdom, which has influenced Indian tradition for the last several millennia. Thus, reading Gita is like knowing a lot about Indian spiritual and philosophical wisdom. Do you want to know about your destiny? Buy the Basic Janampatri Report and know your future.

Date And Tithi Of Gita Jayanti

Gita Jayanti is the festival on which Bhagavad Gita was born. This year it falls on18th December 2018. In other words, it is the birthday of Bhagavad Gita. It falls on the Shukla Ekadashi, i.e. the 11th day of waxing Moon phase in the Margshirsha month as seen in the Hindu calendar. As per the belief, on this day, “Bhagavad Gita” was revealed to Arjun by Lord Krishna in the battle of Kurukshetra (which lies in the present day Haryana in India).

The text in Bhagavad Gita is written in the 3rd person, it is narrated by Sanjay to King Dhritarashtra as it went on between Lord Krishna and Arjun. Sanjaya, the assistant to the visually challenged king Dhritarashtra, was blessed by his Guru Ved Vyas; Sanjay was given the power to remotely view things on the battlefield as they went on at the battlefield.

The Celebration Of Gita Jayanti

On Gita Jayanti day, devotees read the Bhagavad Gita and discuss it with learned priests and scholars on how is the Gita relevant and most helpful even today. Krishna devotees also fast on this day as it falls on Ekadashi. People sing devotional songs and also dance together. They do puja and distribute sweets (as prasad). The chief purpose of celebrating Gita Jayanti is to remember the words of Bhagavad Gita and make use of its wisdom in practical living. Inspired by Gita, people lead a courageous and active life. Bhagavad Gita stands for karma. Are you concerned whether you will get the reward of your karma at workplace? Avail the 2019 Career Report and know your future.

Rituals of the Festival

1) Lord Krishna temples celebrate this day with lots of enthusiasm and energy, pujas are performed with special prayers on Gita Jayanti
2) Devotees from all over India and world visit Kurukshetra on Gita Jayanti day, they take a holy bath in sacred ponds,
3) Other than the holy bath, Lord Krishna is worshipped with an aarti at the end on Gita Jayanti
4) As Gita Jayanti is celebrated on Ekadashi, devotees are required to fast on this day and do not consume grains like rice, wheat and barley, from sunrise till sunset
5) Also, during Gita Jayanti, organised celebrations are carried out, wherein the value of Dharma is taught to the youth through the explanation of Gita