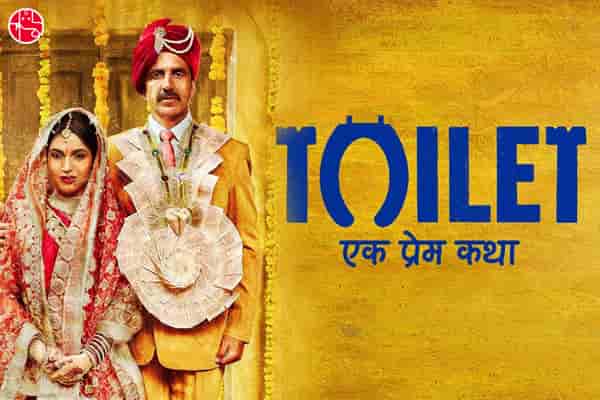 (Image Source: Internet)
Not many movies nowadays take up social causes. Well, Toilet: Ek Prem Katha is a movie which defies this trend. This is a satirical comedy film supporting the Indian Prime Minister Narendra Modi's Swachh Bharat Abhiyan, a governmental campaign to improve the sanitation conditions in the country, with special emphasis on the eradication of open defecation in public areas. The growth of an individual adds up to the national growth. Business too is a very important engine of economic growth. Indian economy is booming. Will your business grow as well? Buy the 2017 Business Report and know the future of your business.
With Akshay Kumar and Bhumi Pednekar in the main cast, the movie shares some similarities with a true event in which 19-year old Priyanka Bharti fled her husband's home in 2012 when there was no toilet. As Toilet: Ek Prem Katha movie is all set to release, there is a wide speculation as to how will the audience take the movie. Ganesha has done an astrological analysis and predicted the performance of this movie. Continue reading to find out what Ganesha says about the movie Toilet: Ek Prem Katha:
Toilet: Ek Prem Katha
Date of Release: 11 August 2017
Releasing Time: 10:00 am (Ref: BookMyShow)
Major Territory of Release: Mumbai, Maharashtra, India
Release Time Chart

Lead Cast In The Movie To Perform Well

Venus is the Lord of the 2nd House, the house of wealth/income. Venus is placed in the 10th house, in its friendly sign. Besides, Jupiter and Moon are in opposition. Such combinations point to better chances of making monetary gains which can come in via various sources. As Jupiter is aspecting the 9th House, it means Toilet: Ek Prem Katha may face challenges while trying to stay and earn revenues at the box office. Toilet: Ek Prem Katha will be appreciated in a parallel manner for various tracks like social satire, love and comedy. Sun's presence in the 11th house indicates some favour or encouragement for the movie from the government or government agencies. Ganesha sees some financial gains for this movie. But are you concerned about your finances? Get the Free 2017 Finance Report and know how you can boost your finances.

Movie's Deshi Touch To Music Will Win It Wide Applause

As stated, the most benefic planet Venus is well placed in the Kendra house. Hence, the music directors, composers, singers and other such entities might have worked very hard to make Toilet: Ek Prem Katha worth watching. The attempt to make the various song tracks on Desi musical instruments (Sarangi, Flute, Tabla, etc) will get a wide applause.

The Lord of the 10th House Mercury is in conjunct with natal Rahu in the 12th house. This points to average success overseas. In other words, Toilet: Ek Prem Katha may not do very well abroad and thus may not procure that many huge profits there.
Ganesha wishes good luck and a bright future ahead to all actors and producers.
With Ganesha's Grace,
Malav Bhatt (Bhattacharya)
The GaneshaSpeaks.com Team
For Instant Solutions! Talk To Astrologer Now.
Share